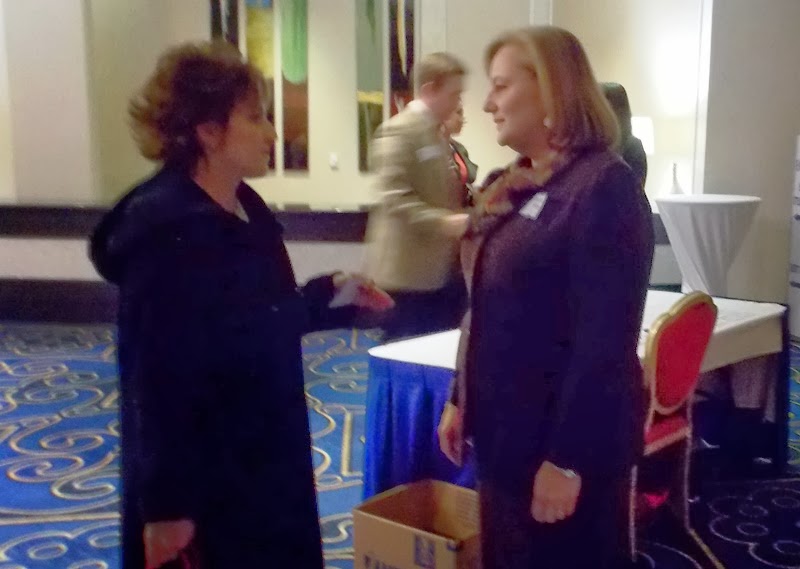 Angela Kelly-Wiecek, Hanover County supervisor who holds the Chickahominy District seat that Bill Bolling once represented, talked with Jean Ann Bolling before Thursday's dinner at the Hilton Hotel in Richmond's Short Pump area. The room filled with invited guests who laughed and remembered campaigns and events over the years. 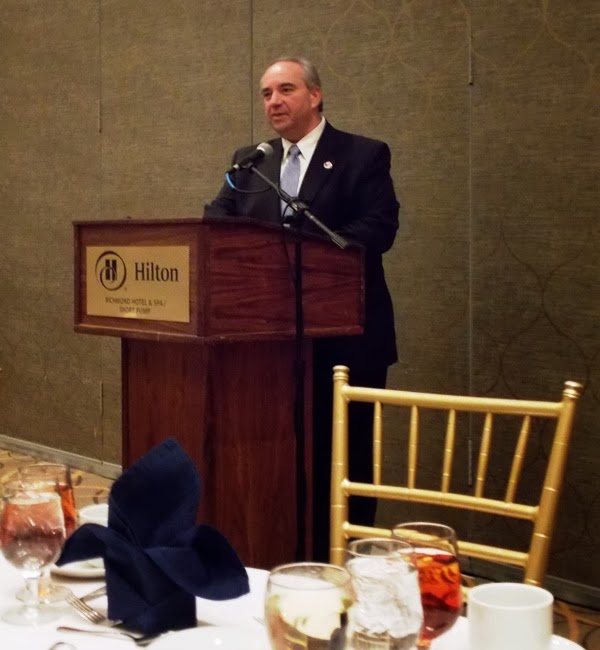 Bill Bolling thanked his wife, his family, his staff, and his many friends who have been there throughout the years. Then he launched into a story about Kristi Way during the 2005 campaign: "We were heading to a fundraiser at Kurt Michael's home...." Ah, yes ... very well remember that fundraiser in Fishersville. 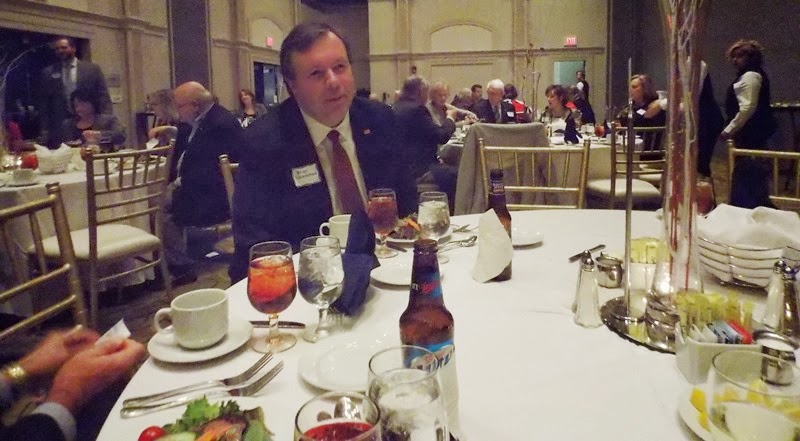 Fellow blogger Brian Schoeneman drove from NoVa to join the 100 guests. He was seated at the lieutenant governor's table along with Linwood Cobb, Kurt Michael, Judi Lynch, and me ... excellent dinner conversationalist on a variety of subjects. 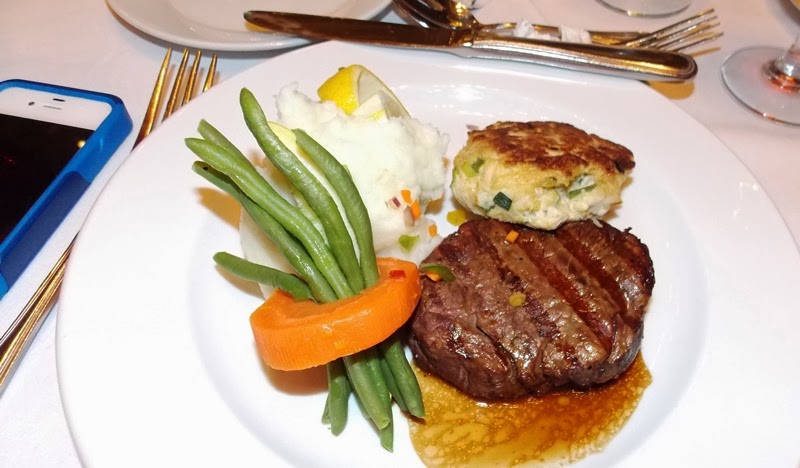 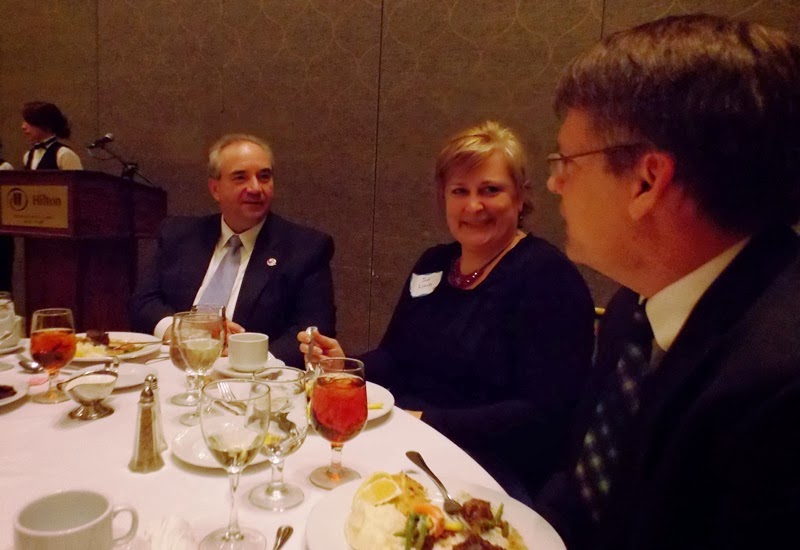 The conversation was entertaining and interesting all night at our table. The Lieutenant Governor, Dr. Judi Lynch, Dr. Kurt Michael.... 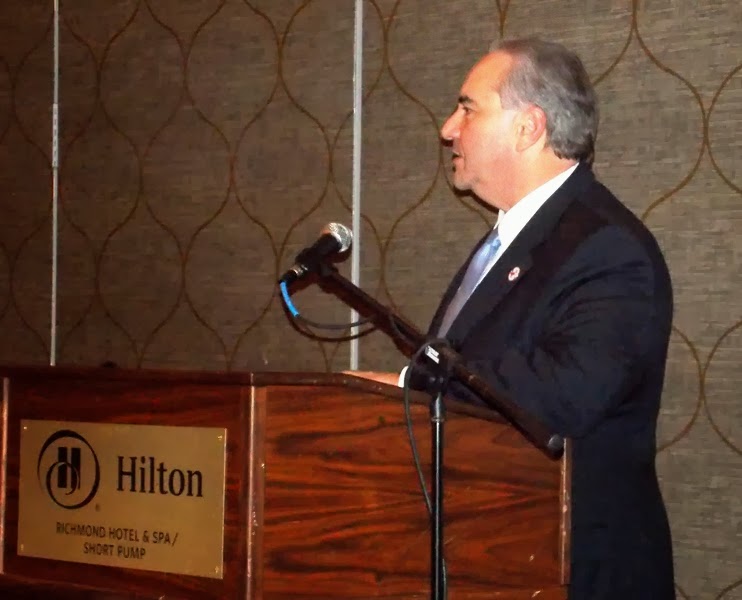 Always an entertaining speaker, the LG had everyone in the room in stitches telling stories about campaigns, staff members, and events ... and thanked them for their help throughout the years. His Bloggers Days, the pewter Christmas ornaments, remarks at the Republican Advance, handing out his Patrick Henry awards, speaking at numerous events in Commonwealth throughout the years including SWAC Breakfast, and many other contributions will make him remembered as one of the most active lieutenant governors in Virginia history.

Saying this isn't the end, he concluded his remarks with, "Let the games begin!" 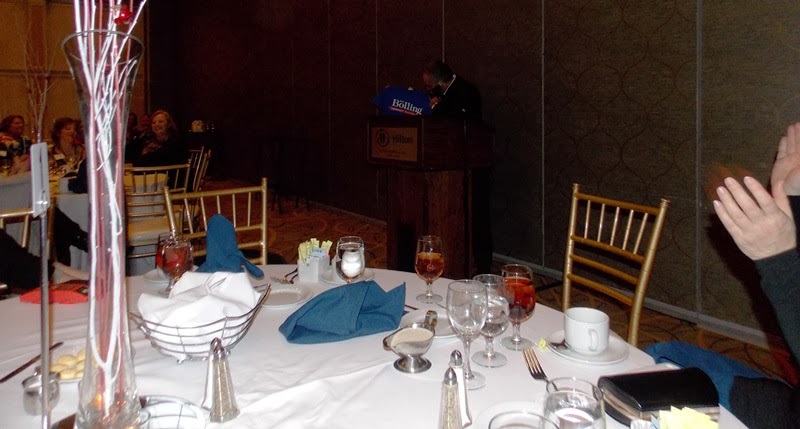 Returning to the podium before dessert, the LG was tossing tee shirts to waiting hands at tables causing laughter and cheers. 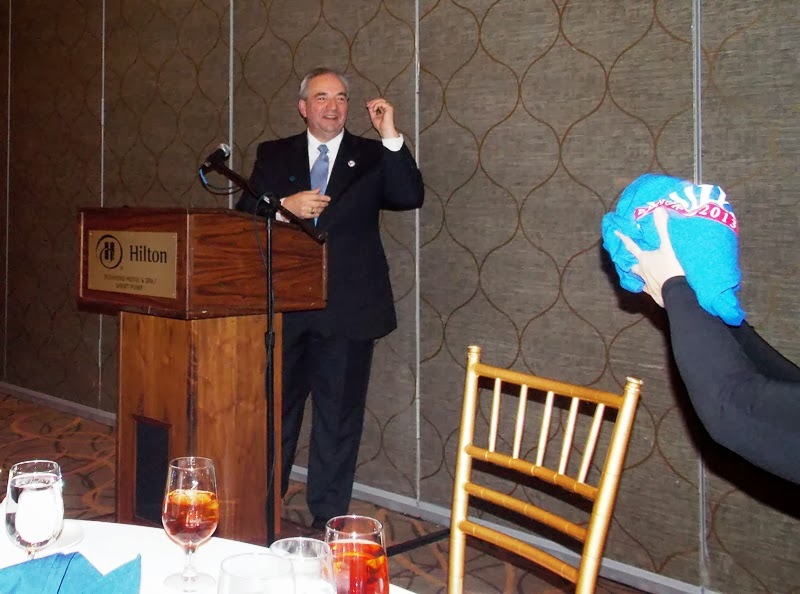 That shirt went to the outstretched hands of Judi Lynch seated at table number one. Go, Judi! 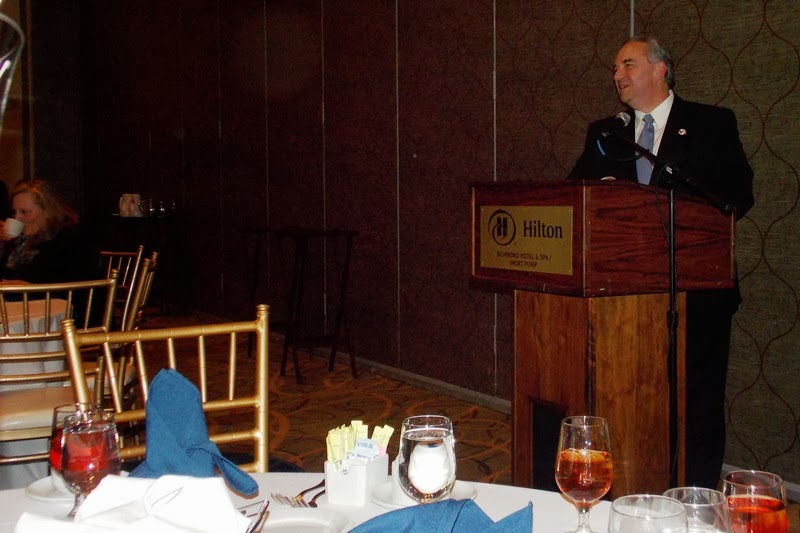 When he announced there were only two Bolling golf hats left, there was a race by Lynn Martin and Trixie Averill to the table in the back of the room to retrieve the caps, a sight that cracked up the room.

Ibbie Hedrick (seated at table) was with the George W. Bush administration before joining up with the Bill Bolling office as deputy chief of staff and spokeswoman. She worked alongside Denise Burch who was director of constituent services and scheduling, and chief of staff Randy Marcus. 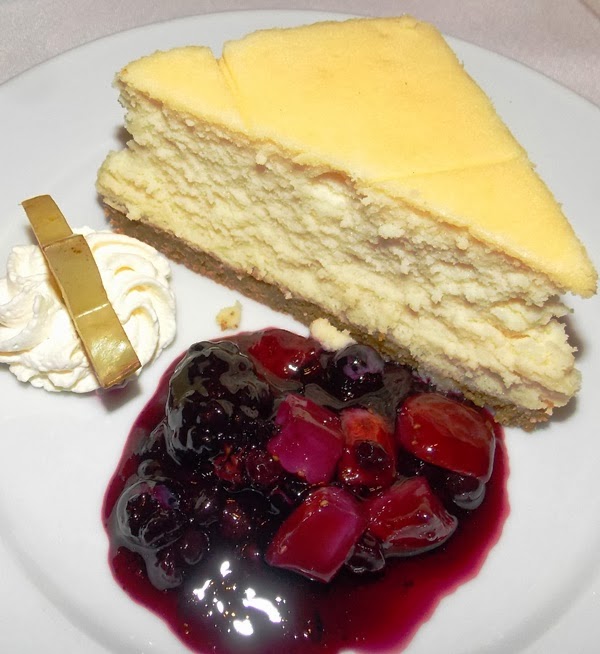 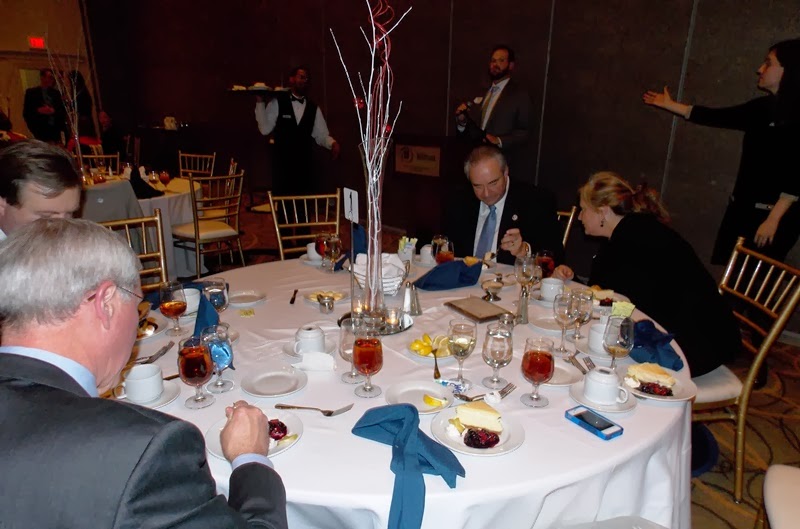 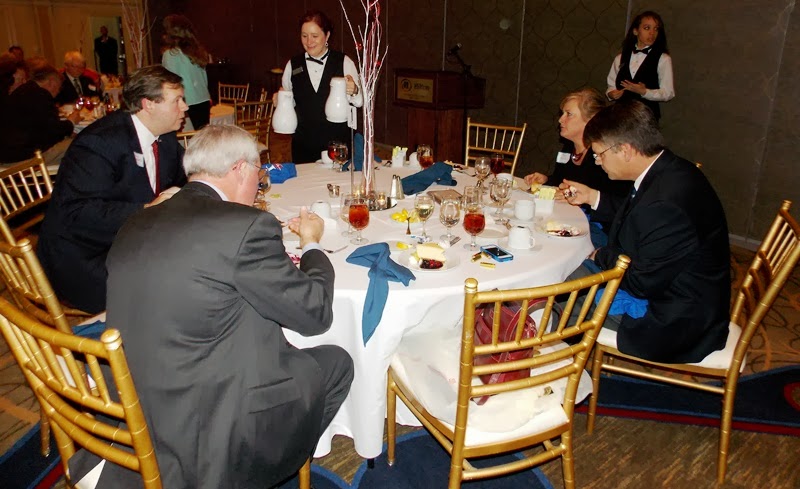 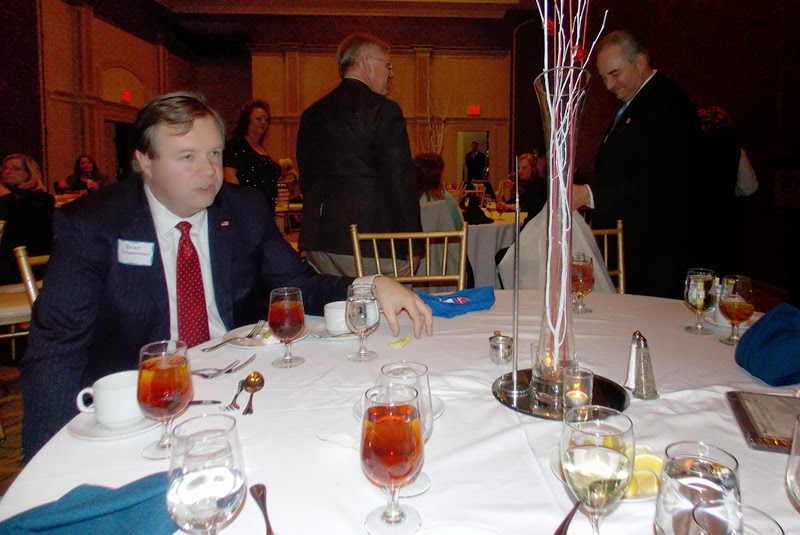 The evening provided an opportunity for everyone to break bread together. Thank you to Lieutenant Governor and Mrs. Bolling for the hospitality and fellowship. One chapter closes ... another opens. 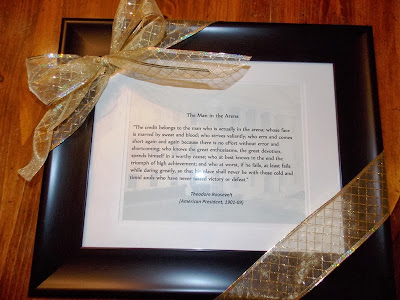 As a thank you to Bill Bolling, I printed the "Man in the Arena" remarks by Theodore Roosevelt on card stock with a watermark in the background of a photo I took of the Virginia State Capitol at the 2011 Bill Bolling Bloggers Day, framed it, and passed it along at dinner with my appreciation for his service as "the man in the arena" the past 22 years. Thank you, Bill and Jean Ann Bolling....