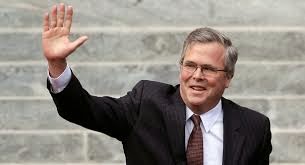 Jennifer Rubin's Tuesday column in the Washington Post provided good insight into former Florida Governor Jeb Bush and the opportunity for him to run for president in 2016.

Don't get me wrong ... I'm not writing Chris Christie out just because of his "Bridgegate" issue. Come on, people -- if Hillary can bungle Bengazi the way she did and still be a serious contender for 2016, a little tied-up traffic can't be enough to knock Christie out of the running. But some conservatives can't get beyond the fact that Christie was, in their opinion, a little too snuggly with the President of the United States. I say the man had a huge disaster on his hands in Hurricane Sandy's tragic damage to New Jersey, and was being courteous to the man who offered help.

What is it with conservatives who think everyone needs to be snippy and nasty to those they politically disagree with? Sorry, I prefer to take a page out of the playbook of George W when it comes to civility.

Back to the list. Sadly, our own Governor Bob McDonnell is now pretty wounded by his own Giftgate issues that surfaced while in the Executive Mansion.

Which brings us back to George W's brother, Jeb. No matter what his mom said about not needing any more Bushes in the White House -- Barbara often makes off-the-cuff comments like that -- if he's the man for the job, it doesn't matter that he's a Bush.

There are many who disagree and I respect that. They think the baton should be passed on to "new blood." I say it needs to go to the person best qualified who can lead this country during the current turbulent times and, though I wouldn't wish it on my worst enemy, if Jeb wants the job then I certainly think he's qualified with his background and common sense Bush family knowledge.

Jennifer Rubin shoots down most of the reasons people would have against Jeb. Give her column a read ... it could open the door to back this very-electable Bush brother/son.
Posted by Lynn R. Mitchell at 1/14/2014 08:27:00 PM