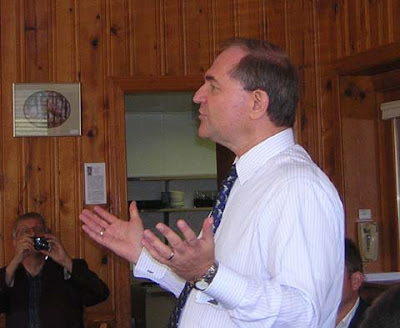 
The dining room at Rowe's was already half-full when I arrived at 7:45 which was fifteen minutes before the 8:00 start of the SWAC-GOP Breakfast. An enthusiastic group of about 50 local Republicans came out to welcome Governor Jim Gilmore to Staunton ... and they were ready to greet him when he arrived. He mingled and worked his way through the restaurant, shaking hands and talking with patrons as he made his way to the private dining room. 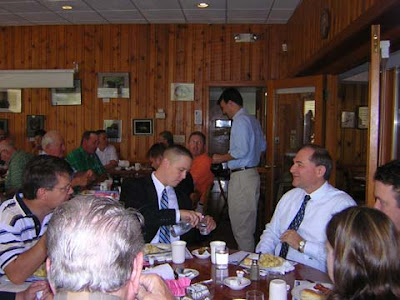 SWAC Chairman Kurt Michael talks with Gov. Gilmore during breakfast
After being introduced by Augusta Chairman Kurt Michael, who reminded the crowd that Jim Gilmore served as Governor of Virginia from 1998-2002 and as Republican National Committee Chairman in 2000 presidential campaign that was not decided for weeks, the Governor offered rousing remarks to stir the crowd. He was governor of the state when 9/11 occurred in 2001; he chaired the National Homeland Security committee for five years; he was in Army intelligence so he understands the national security risks we face from terrorism; he is on the board of the National Rifle Association (NRA).

He thanked the "rank and file," as he called the grassroots, for all their volunteer help during every campaign. Money is important ... but it is not a substitute for the leadership of the grassroots. 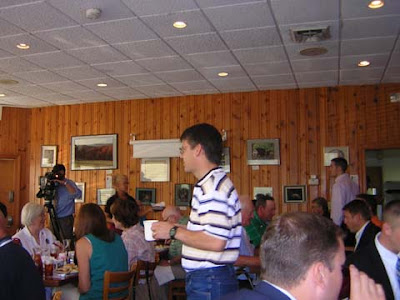 Augusta Chairman Kurt Michael walks toward a table to welcome folks to breakfast.
He discussed transportation and improvements for I-81, and talked about how he had proposed the rebuilding of the Woodrow Wilson Bridge that carries I-95 into Washington, D.C. -- construction that is ongoing even at this time.
He worked during his administration for higher education, freezing and then lowering college tuitions to make it more affordable to more students. He worked for more jobs especially in the western part of the state
. 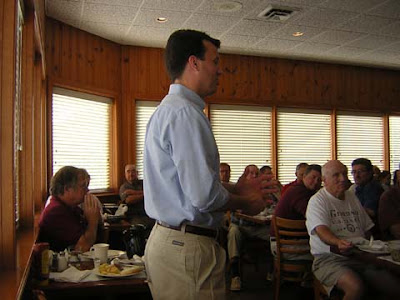 
We need forward-looking leadership, he urged. Leaders should not be judged by personality or other shallow benchmarks but, instead, on their leadership qualities.
Augusta Secretary Chris Green 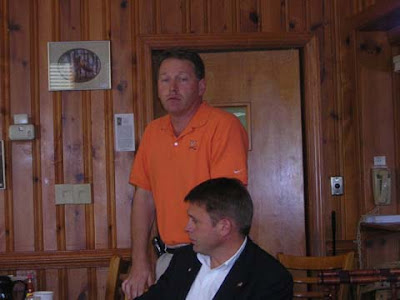 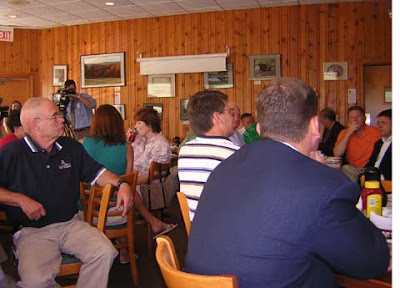 Local media were there to cover the event. NBC-29, WSVA TV-3, Bob Stuart from the Waynesboro News Virginian, and Chris Graham from the Augusta Free Press listened to Jim Gilmore's remarks and then interviewed him afterward. 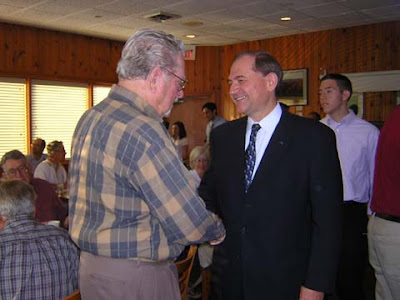