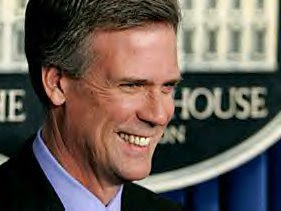 Today was Tony Snow's last day as the President's press secretary at the White House. I am sad because I like this man who is battling cancer at a way-too-young age. I liked him on Fox News Channel; I think he has done a wonderful job as press secretary.
Erick at Red State wrote:

Tony Snow went from being a speech writer in President George H. W. Bush's White House to the world of journalism and Fox News. Then, this year, he returned to the White House to serve as the current President Bush's Press Secretary -- a job he says is a blast.
In the world of politics, Tony Snow is both a humble, genuine person, and a rock star.