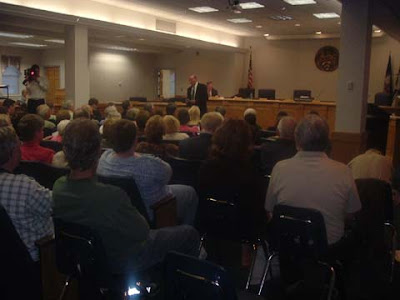 The Family Foundation said the following after Tuesday night's meeting:


For several years The Family Foundation has worked with concerned citizens across Virginia in an effort to make our Commonwealth as inhospitable as possible to sexually oriented businesses (SOBs). Citizens in several localities have successfully lobbied their local governments to improve local zoning ordinances to restrict opportunities for these shops to open.

Last night, Chris Freund, our Vice President, Policy and Communications was at a public forum in Staunton speaking to over 100 people who oppose the establishment of a SOB in their community. Because the local zoning ordinance does not address these businesses, they are vulnerable. As a result, am "Adult" business has applied for license to open in the city of Staunton.

Citizens were informed last night that it is absolutely appropriate and Constitutionally allowable to pass strict zoning ordinances that restrict the "time, place and manner" of operation of SOBs. Localities can restrict when these shops can be open, where in the community they are allowed, and what type of behaviors are allowed inside.

Despite the usual cries of "first amendment rights" and "imposing morality" by a few, the fact is that the vast majority of people do not want these businesses opening up in their communities. And the courts have made it clear that citizens have a right to restrict these businesses.

In addition, the distribution of "obscenity" is illegal in Virginia. The Supreme Court has defined obscenity, but it leaves it up to "community standards" to decide if material in these businesses meets that definition. In other words, the community determines what is and what isn't obscene. That happens when someone who distributes this material is arrested and goes to court. A judge or jury then determines if the material meets the courts definition of obscenity.

Ultimately, what is going to be allowed in a community is up to the citizens.

A majority of localities in Virginia have passed or are considering strict zoning ordinances already. This leaves those cities and counties that have not addressed this issue open to these businesses setting up shop.

If your city or county has not addressed this issue, please work with like-minded citizens in your community to lobby your local government to get this done soon. The Family Foundation is here to help you! We have the materials you need to make a difference in your community. Click Here to see a news story regarding last night's public forum in Staunton.

A Pornography Task Force is being formed to work with City Council and Commonwealth's Attorney Ray Robertson on setting up zoning ordinances to address this issue in the future. The current business cannot be stopped but the city can be pro-active about those that may follow. Headed up by Andrea Oakes, a meeting has been scheduled for Monday, September 24, 2007, at 7:00 p.m. at St. Paul's United Methodist Church in Staunton. Click here for more information.

It's issues like this that makes it increasingly difficult for me to be a Republican. I thought we were the party of small government ("Government is the problem..." - Ronald W. Reagan). What you are demanding here is government regulation to the extreme in the name of imposing your religious morality on your neighbors.
Let's face it, the party is facing a sad state of affairs in the commonwealth. We've lost the governor's mansion, we've lost one US Senate seat and are about to lose another, the general assembly and state senate are at risk. We've become the party of Big Government in the name of controlling illegal immigrants and trying to translate certain prominent party members' interpretation of the Bible into state and municipal laws.
Stores that sell pornography are hardly a threat to the community (there's more crime going on at street corners, Wal-Mart, the shopping mall and vacant buildings in the city than there is at any adult novelty store I've heard of). But clearly that's just a scare tactic being utilized so as to help you accomplish your goal of rewriting laws into the conservative Southern Baptist view of the world. If this is what being a Valley Republican is all about, please count me out.

This is not a partisan issue. Those who try to make it one are being partisan themselves.

There is a concern in the community about the opening of an adult video store. Having a forum offered an opportunity for those who had questions to come out and hear from a city council member, the Commonwealth's Attorney, a Family Foundation member who had regulations from other localities, and concerned citizens willing to step to the plate to address the issue. Those folks were educating themselves ... so I am somewhat puzzled that you feel so threatened by that.

Those I saw in the room Tuesday night and have heard from in the community are not only "conservative Southern Baptists" but also Presbyterian, Catholic, Mennonite, Methodist, and even those with no church affiliation at all. There were Republicans and Democrats This is a morality issue.

Were you at the forum to hear how those who have seen this happen in other localities witnessed an increase in crime, drug use, devalued property values, and increased crimes against women and children? We can learn from those who have already walked the walk ... and that was why the forum was offered.

This issue has been addressed by Chesterfield County and many other localities who felt it was necessary to legislate to avoid problems down the road.

Adult video/porn shops do not fit into the historical charm of Staunton.

Thanks for offering an opinion on the issue.