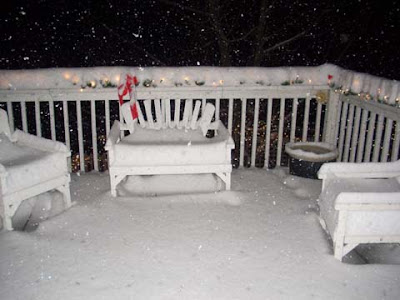 Deck furniture sports freshly fallen snow as it continues to come down.

There's already 7.5" of snow in western Augusta County as of 9:30 Friday night and it's still coming down at a steady pace. (Update: Snow total as of midnight is 12.5".) The miniature white Christmas lights are on ... greenery on the railings ... red bows ... snow piled up ... it looks like a Christmas card out there.

The Weather Channel has been showing Roanoke and Richmond all night as well as the Blue Ridge Mountains of North Carolina. A live shot of Sugar Mountain in Banner Elk, North Carolina (outside Boone), brought back memories of living near that area of NC some years ago. Sugar and Beech Mountains ... know them well.

Fishersville Mike posted about the snow and noted Augusta County schools got out one hour early at 2 pm. Staunton finished out the day ... Grace Christian School closed at 12:30 as did surrounding counties.

Bob has a first photo of the snow after dark, noting that we could get 12-24 inches before it's over and asks, "Where are the snows of Yesteryear?" I remember reading about Thomas Jefferson riding his horse in snow up to the horse's chest. Makes me grateful for an enclosed Subaru with heat.

The radio is announcing dozens of closings Saturday. Wonder if anyone will try to go shopping? We're staying home to watch movies, play games, follow the storm, and just enjoy watching the winter wonderland as it unfolds before us.

And they're saying it's supposed to do this all Saturday. This may be a once-in-a-decade snowstorm ... don't want to miss it.

Update:
- Rick Sincere has photos from Charlottesville.
- As of 10:10 pm the snow total had increased to 9".
- Fishersville Mike is watching an outdoor bench disappear under the snow.
- As of 10:45 pm there's 10" of snow on the deck.
- The Commonwealth is under a state of emergency.
- The Virginia National Guard has called 400 soldiers to help with storm-related emergencies.
- Yankee Phil reports in with 8.5" of snow on his deck at 10 pm.

Email ThisBlogThis!Share to TwitterShare to FacebookShare to Pinterest
Labels: Christmas, snow in the Shenandoah Valley