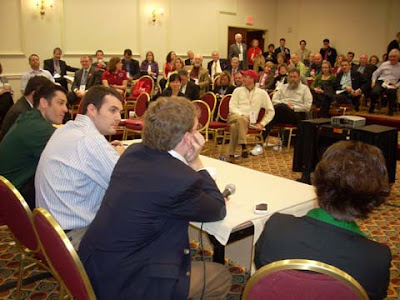 At the Republican Advance over the weekend, the New Media Roundtable panel was made up of (from right) Krystle Weeks, Tucker Martin, Vince Harris, Ford O'Connell, and Jason Kenney. 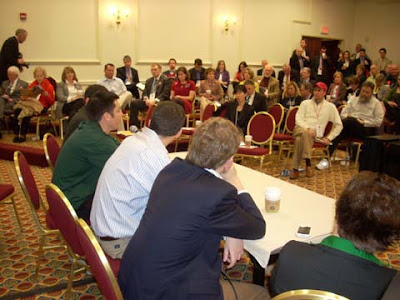 I took photos of the panel and audience from the podium. How many opportunities do you have to blog while moderating a panel? 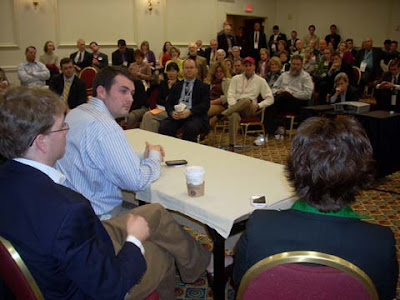 It was a well-informed group with good input about new media tools and how the GOP made up lost ground during the 2009 campaign season. 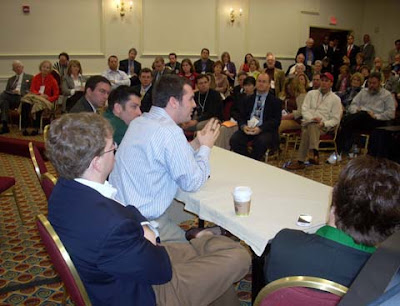 The Republican Party of Virginia featured five new media workshops at last weekend's 2009 Advance in Williamsburg ... and the size of the crowds showed it to be a topic of interest to many.

RPV tapped some of the best and brightest in its new media stable:


- New Media 101 was led by Jason Kenney with help from Krystle Weeks;
- New Media: Digital Politics for Campaigns & Organizers consisted of a panel made up of Steve Pearson and Ford O'Connell from Project Virginia;
- New Media: Web Video - Powerful, Cheap, and Easy was led by Steve Albertson, Tim Murtaugh, and Greg Letiecq;
- Raising and Spending Money Online: Tips & Tactics for Campaigns, Committees, and Advocacy Groups was led by Vince Harris.

I had the honor of being asked to moderate the Virginia New Media Roundtable workshop which was described in the program as "a discussion among leading Republican new media activists and professionals ... discussing the role of blogging and other new media in shaping the historic 2009 election, and the path forward to victory in 2010 ... shared ideas about the importance of the GOP's reclamation of new media dominance and what it means for the future of the Republican Party."

It was a great panel of young new media personalities....

The hour went quickly as the panel began by introducing themselves to the audience and then got to know the audience by asking how many blogged, how many read the blogs, how many Tweeted, and how many were on Facebook. We were pleasantly surprised at the sheer number of attendees who participated in those new media tools.

The reality was that just a year ago the hot topic at the 2008 Advance was how badly Republicans had been beaten in the use of new media. The buzz was all about how Barack Obama and his followers had made tremendous use of tools such as text messaging, online videos, Facebook, Twitter, and other social media to feed, grow, and organize the mass of young people and new voters who made a difference for him at the ballot box.

Just a year ago at the Advance, on the spur of the moment, four bloggers created a make-shift, last-minute "bloggers row" at the water table in the rear of the room to live-blog the Attorney General debate. Three of those bloggers were part of Saturday's panel -- Krystle Weeks, Jason Kenney, and Lynn Mitchell. The fourth was Shaun Kenney who is now a Supervisor-elect in Fluvana County.

What a difference a year makes! Just one short year later, in Virginia, Republicans claimed dominance in all those social media tools and really outshone the Democrats at every level. Here at this Advance, we were blogging the event and had five featured workshops. Earlier this year there was an impressive Bloggers Row at the RPV Convention consisting of 30+ bloggers.

The panel discussed what allowed that complete turnaround, about Republican new media efforts, 2010 and beyond, online fundraising efforts, how to disseminate information about GOP events such as the Advance or health care townhalls or Eric Cantor's Republican Roundup, and more.

We had time for only one question although many others had their hands up. There was much interest, and a huge thank you goes out to RPV Chairman Pat Mullins for making new media a priority along with his encouragement and support. Also thanks go to New Media Committee Chairman Cortland Putbrese along with Steve Albertson and Lori-Ann Miller.

We had positive feedback after the workshop ... some said the information offered was extremely useful while others said they had learned new use of tools and looked forward to putting it to use.