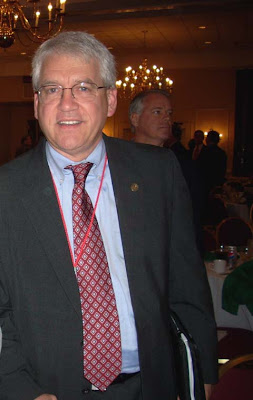 Mike at Saturday's RPV luncheon at the Advance.

Congratulation to Mike Thomas, 1st Vice Chairman of RPV's Central Committee, who was honored at the 2009 Republican Advance by having the "Volunteer of the Year" award named after him, something he jokingly said usually happens after someone dies. As it was announced at Saturday's luncheon, Mike made his way to the stage as the packed room of 650 activists, electeds, and officers enthusiastically rose to their feet and honored him with prolonged applause.

A tireless worker for over 30 years, Mike is one of the most respected members of the Republican Party of Virginia, filling in as interim chairman when called upon and toiling long hours for the Party while working with candidates and volunteers.

Along with all his Republican duties, Mike is also a husband, father, grandfather, and Children's Church leader in his church. A graduate of the University of Richmond, he is Senior Vice President of McGuire Woods Consulting.

It is a well-deserved honor and from now on "Volunteers of the Year" will receive the Michael Thomas Award. We all thank Mike for his dedication and service.
Posted by Lynn R. Mitchell at 12/08/2009 09:33:00 AM