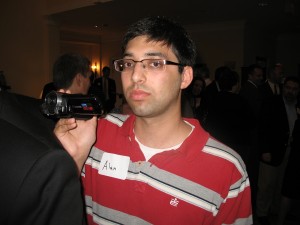 
At a political event in Loudoun County tonight, a young man from an organization called Bon Bon Man was following former Virginia Governor and Senator George Allen, attempting to videotape Mr. Allen by standing as close as possible, sometimes with his video camera barely a foot from the head of Mr. Allen or another member of the conversations Mr. Allen was attempting to have.