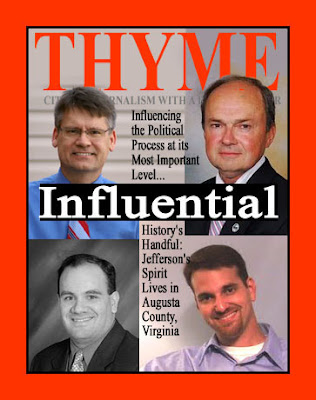 Bob at The Journey has the newest issue of Thyme Magazine out and it is dedicated to the local candidates of Augusta County ... those willing to step to the plate when others shy away. Bob writes:

The unrealistic assessment numbers resulted in reduced distribution of state revenues. Public safety and education resources were understandably stretched. Pastures supervisor Tracy Pyles is already in the fight, having previously introduced a motion to discard the new assessment. This election cycle sees some new candidates stepping forward to seek seats in other districts. David Karaffa is running for the position in the Beverley Manor District and Dr. Kurt Michael in adjoining Wayne.

Here are candidates who are stepping up to create solutions in such areas as fire protection. They are putting together real proposals for real problems. They deserve a hearing and your vote on November 8th.

Look for another important hat being thrown into the ring on April 30th. Augusta County will become a model for other localities to follow. Jason Bibeau invites all concerned citizens to come out to the Government Center at 9:00am this coming Saturday. THYME will have more on this important story as it unfolds.

Email ThisBlogThis!Share to TwitterShare to FacebookShare to Pinterest
Labels: Augusta County, Board of Supervisors