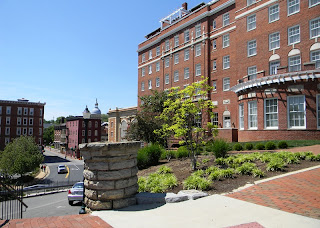 Looking west from the south garden of the Stonewall Jackson Hotel and Conference Center in historic downtown Staunton, Virginia. This 124-room hotel captures the spirit, history and charm of the old South. Originally built in 1924 and a member of Historic Hotels of America, this modern yet refined Virginia gem underwent a complete top-to-bottom renovation in 2005 and has been lovingly restored to it's original grandeur. 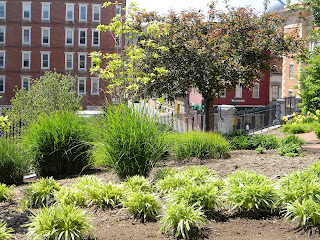 Staunton was recently named as one of the top 20 Small Towns in America by Smithsonian Magazine. Click here to see the article. The Stonewall Jackson Hotel features an indoor heated pool, fitness center and a business center, and showcases 8,500 square feet of meeting space with accommodations of up to 400. 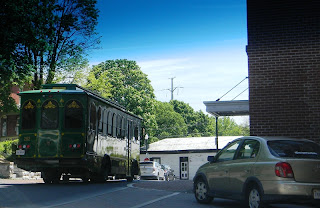 One of Staunton's free trollies passed by on Market Street as we stood at the front entrance to the hotel. Hop on board and ride to a favored destination, getting on and off wherever needed. Walk the downtown streets and visit restaurants, shops, and businesses catering to the many needs of residents and visitors alike. 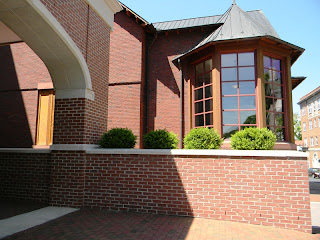 Next door to the Stonewall is the Blackfriars Playhouse, home of the American Shakespeare Theater, where performances can be watched year-round. From their website: "Situated in the heart of the Shenandoah Valley in historic Staunton, Virginia, the 300-seat Blackfriars Playhouse -- the world's only re-creation of Shakespeare's original indoor theatre -- opened its doors in September 2001 and has already delighted tens of thousands of enthusiastic audience members from around the world. The product of years of research, this unique, historically accurate performance space provides the perfect backdrop for the ASC's Elizabethan staging practices, and has already been called one of the most historically important theatres in the world." 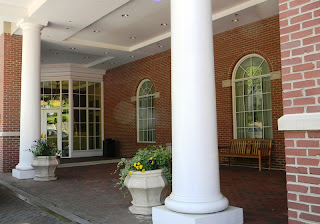 The front portico of the Stonewall offers a welcoming entry to visitors. 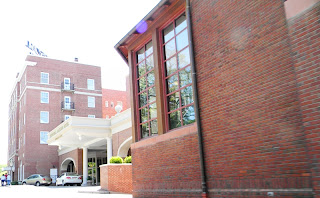 On Market Street beside Shakespeare Theater looking at the Stonewall Jackson Hotel.