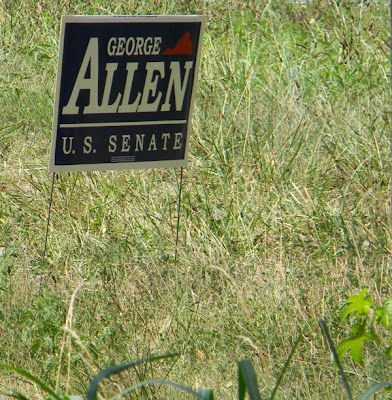 George Allen, Republican candidate for the U.S. Senate, will be the keynote speaker at this year's Shad Planking event in Wakefield on Wednesday, April 18. The annual gathering is a big day for politicians statewide, Republicans and Democrats, as sign wars break out on the roadways leading to the gathering area, and volunteers head out early in the day to get a jump on the competition.

Media types and bloggers will be out in full force as well as politicians who will be pressing the flesh while supporters and sideline watchers hit the beer wagons and wait for that shad to be planked. Just as it has since the 1930s, the piney woods of Wakefield will be the happening place for one brief day of political speeches and back-home music.

The shad planking is not about the shad ... and it's not even about the beer. It's about networking ... the back-slapping, elbow-rubbing, eye-winking opportunities to pull in new supporters, line up deals, and continue the politicking that will be the topic of the day.

Previous speakers have included just about every state or federal elected official in the Commonwealth.

This year's event is sure to be a sea of blue with Allen supporters and staffers wearing Allen tee shirts and carrying Allen signs and sporting Allen caps. Go, George, go!