Heavy wet snow may cause power outages along Appalachians 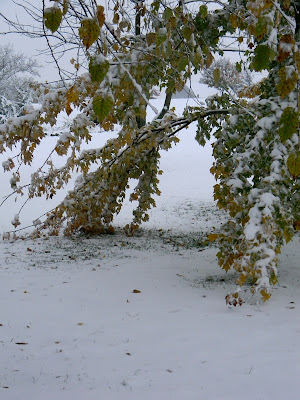 Heavy, wet snow in Augusta County, Va. -- October 2011.
Weather forecasters have been talking about it for a few days, adding the "s" word into predictions for the next few days in West Virginia and western  Virginia, Maryland, and Pennsylvania.

Snow. Yes, we know ... it's April 22. After a mild winter and an exceptionally warm spring, after weeks of blooming and grass mowing and days enjoying the sun, the possibility of snow has been inserted into the forecast. Even for a cold weather lover like me, it's past time. Some have planted gardens and outdoor annuals and are truly not looking forward to a late burst of winter weather.

AccuWeather, trying to prepare folks for what may be a heavy, wet snow, has offered up some suggestions for what to do before and after the storm:

An April storm tracking north along the eastern coast of the U.S. will bring heavy, wet snow from the Appalachians of West Virginia, across western Pennsylvania and into southwestern New York.

There is a potential for the snow to bring down tree branches, which in turn could drag down power lines.

"In some places the power will be out for days," said AccuWeather.com Expert Meteorologist Henry Margusity.

People residing in the mountain regions of West Virginia to Pennsylvania and western New York should prepare for the possibility of no electricity for days.

Get your generators set up and be sure to have plenty of gasoline to keep them running. Remember, do not put generators inside your house.

Thankfully those preparations are for folks west and north of us so we don't have much to worry about but we've been warned that we may seen a few snowflakes during that time. One thing's for sure with Mother Nature: she's in control. Be safe out there....

Email ThisBlogThis!Share to TwitterShare to FacebookShare to Pinterest
Labels: snow