George W. Bush not endorsing in presidential primary is no mystery 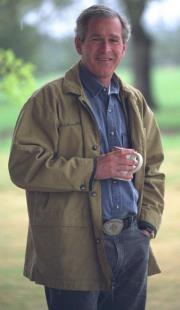 The media are beside themselves trying to figure out why former President George W. Bush has not endorsed in the current Republican presidential contest. Everywhere you look, there's some variation of the question wondering why he isn't front and center. One example of the ink spent on the story is this one from Politico that asks, "Where is George W. Bush?" and accuses him of being on a "self-imposed exile" from the current political season.

After Bush's father, former President George H.W. Bush, endorsed Mitt Romney for president last week, the feeding frenzy picked up with many of the mainstream media outlets wondering whether W would endorse and why he hadn't already endorsed and explaining the reasons why that made him the proverbial elephant in the room.

The plain and simple answer is that George W. Bush is doing nothing any different now than he has done since leaving the White House in 2009. He has made it a point to keep a low profile in his private life and not interfere in policies or make comments about the current president or issues. It's the way of the Bush family. It's called diplomacy, something missing with many in the MSM.

Friends with the Romney family for years, the Bush family has ties that have encouraged former President George H.W. Bush and his son, former Florida Governor Jeb Bush, to endorse Republican front runner Mitt Romney. Former First Lady Barbara Bush has even made Get Out The Vote calls for Governor Romney.

George W. Bush, meanwhile, is simply continuing his policy of not interjecting himself in politics. Interesting that the MSM are able to put so many words in his mouth during his silence.

Typical of GWB, he is not letting the press live rent-free in his head as he goes about his life. It has been three years since the Bushes left Washington and during that time he has found plenty to keep him busy. He wrote a #1 national best seller book, "Decision Points," that stayed at the top of the charts for weeks, selling two million copies in the first month and outpacing books written by former President Bill Clinton and others.

He has been busy in Dallas with the Bush Center, the Bush Library, and the Bush Institute, traveling the country and the world on behalf of human freedom, global health, education, economic freedom, and AIDs research in Africa, something he began while President. In 2008, he received the Bishop John T. Walker Distinguished Humanitarian Award for his work in Africa, and in December 2011 he and Mrs. Bush traveled to Tanzania, Ethiopia, and Zambia in their continued commitment to the people.

Indeed, not many are aware of Bush's humanitarian work in other parts of the world -- most certainly the MSM doesn't give credit. However, in the summer of 2011, Bono of the rock group U-2 praised Bush for his fight against AIDs in Africa, a stand that has saved over five million lives during the past eight years. Separately, human rights activist John Prendegast noted that it was during Bush's administration and with the help of America's influence that South Sudan was able to successfully obtain peace with the north.

Democrat Bob Beckel, co-host on Fox News Channel's "The Five," recently praised Bush's African work and picked him as one of his two all-time favorite presidents.

On the home front, most of the time the former president has spent with America's military members is unknown to the public, greeting solders at airports when they return home from service overseas, reaching out to individual families, and working with the Wounded Warrior Project that surrounds him with injured military veterans.

A 2011 Fox News video report by Bret Baier about the Wounded Warrior 100K bike ride in the back country of Texas showed the real George W. Bush, comfortable with everyday Americans and revealing the one thing he misses as president is being Commander in Chief of the military. The connection between him and the troops is real as he shows respect and admiration for them and they, in return, show respect and admiration for him.

In addition, Bush has spoken to numerous groups around the country, helped raise money for a number of charitable causes, and, in 2010, he and former President Bill Clinton set up a relief fund for the victims of Haiti's earthquake.

Most of all, he is able to enjoy time in private with family and on the ranch. From Politico:


... Bush has never had the political neediness of Clinton, and is not spurred on by what [former Bush White House spokesman Ari] Fleischer dubbed “the roar of the crowd.”

“So much of it is voluntary,” Fleischer said about Bush’s isolation. “I think President Bush is happy to be enjoying his private life. I don’t think he craves or misses life on the stump.”

Indeed, while many in the Republican Party may be eager to turn the page on Bush, former aides to the 43rd president say that’s a two-way phenomenon: Bush, too, has happily moved on from politics as a profession.

The ability to voluntarily step back from the limelight is the sign of a leader and a truly secure individual. George W. Bush obviously is comfortable with his life and feels no need to entertain the MSM by doing what they want.  As a result, he will continue writing the script of his own life, and it may or may not include an endorsement of Mitt Romney. One thing is for sure: The final decision will, ultimately, be his.