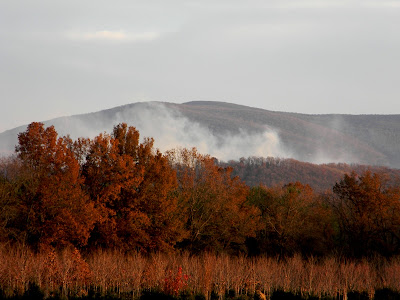 Wildfire on Blue Ridge Mountains in November 2011.
Fire on the mountain! Smoke billowing from mountain slopes and flames along the ridges have firefighters on the scene throughout the Commonwealth. With red flag fire warnings that produced low humidity, warm temperatures, and winds gusting to over 30 mph, wildfires have consumed over 14,000 acres of land in national forests and private property.

The Virginia Department of Forestry posted the latest update on their website:


Five large wildfires and several small ones are burning more than 14,000 acres across the Commonwealth today. While most of the large fires are on National Forest System land, the Virginia Department of Forestry, USFS, National Park Service along with numerous volunteer fire departments are out in force battling the blazes to protect lives and property.

Several Virginia state agencies, including the Departments of Emergency Management, State Police, Transportation and Fire Programs, are supporting the efforts.

A combination of high winds, low humidity and no precipitation enabled the wildfires to grow and spread quickly. Many of the fires are on steep, rocky terrain making it difficult for firefighters to reach the flames.

The Shipwreck Fire in Page County has already burned more than 4,748 acres and spans more than 5.5 miles in length – nearly the entire length of First Mountain. Firefighters working this wildland fire have protected more than 125 homes and other structures thus far. Several roads and trails are closed. The cause of the fire is under investigation. As a precaution, Columbia Gas will purge its gas line in the area which could lead to a disruption of service for some customers.

Ten structures are threatened in the Barbers Creek Fire burning in Alleghany and Craig counties. More than 1,750 acres have burned thus far, and the fire is 30 percent contained.

The Alleghany Tunnels Fire is burning in a remote location 10 miles west of Covington in Alleghany County. A total of 6,004 acres have burned, and Forest Roads 69 and 345 are closed. Smoke is visible on I-64, SR 311 and SR 59. The fire was reported Saturday and cause has not been determined. Ten structures have been protected.

The Wolf Gap Fire in Shenandoah County has burned approximately 600 acres primarily on national forest in the Wolf Gap area. Numerous roads and trails have been closed. Firefighters are working to protect the Wolf Gap Campground. Driving visibility in area is limited due to smoke. The fire was detected Sunday afternoon and is believed to be human caused. With the start of Virginia spring gobbler season Saturday, the US Forest Service reminds turkey hunters that all areas adjacent to an active wildfire are closed to hunting.

The Rich Hole Fire (17 miles east of Covington) has burned 1,159 acres and is threatening 10 structures. Approximately 80 percent of the fire is burning in the Rich Hole Wilderness Area. The fire is burning on private land and National Forest System land. The fire was reported Monday at 7 p.m. and the cause is under investigation.

Several smaller fires are burning in several counties across Virginia. A Red Flag Warning for the counties of Albemarle, Alleghany, Amherst, Augusta, Bath, Bedford, Botetourt, Craig, Franklin, Henry, Nelson, Patrick, Roanoke and Rockbridge remains in effect until 8 p.m. The statewide 4 p.m. Burn Law – which restricts burning until after 4 p.m. each day – is in effect until April 30th. Forestry officials are asking all Virginians not to burn for the next several days and to keep their cigarette butts in their vehicles.

The Virginia Department of Forestry is charged with protecting and developing healthy, sustainable forest resources for Virginians. Headquartered in Charlottesville, the Agency manages 16 million acres of forest land.
Posted by Lynn R. Mitchell at 4/11/2012 07:40:00 PM