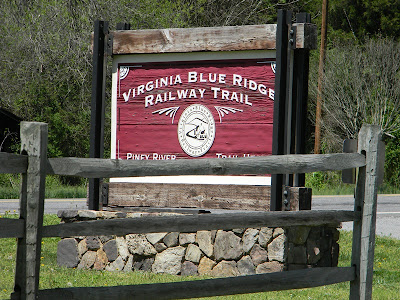 The Virginia Department of Game and Inland Fisheries website has information about this birding nature trail located on Rt. 151 northwest of Amherst in Piney River:

Piney River is one of the most recent towns in Virginia to convert their disused rail bed into a nature trail. The trail is still being developed, starting at the refurbished train depot in Piney River and heading east through a varied landscape of evergreen and deciduous forest mixed with brush land and open areas.

The woods along the trail are alive with birds throughout the year. Residents such as blue jay, northern cardinal, Carolina chickadee, tufted titmouse, and red-bellied and downy woodpeckers are joined in winter by numerous yellow-rumped warblers, ruby-crowned kinglets and yellow-bellied sapsuckers. Check the trailside brush piles for song, white-throated and the occasional white-crowned sparrow. During migration the area should be checked for neotropical migrants such as warblers, vireos, tanagers and orioles, while summer should be good for a variety of dragonflies and butterflies.

The trail begins beside the renovated train depot located on Rt. 151 where there is a parking lot and Porta-John. The red buds and dogwoods were blooming Saturday when we were there. 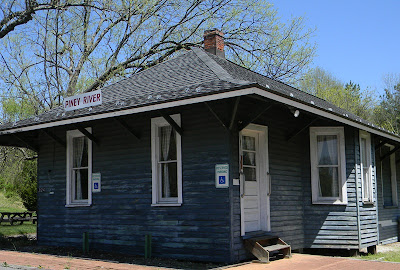 The trail traces the route of the former Virginia Blue Ridge Railway. The line originally extended from Tye River Depot, where it interchanged with the Southern Railway, to Massies Mill. The railroad followed the course of the Tye and Piney Rivers for several miles before entering the mountains. It passed through the communities of Roses Mill, Piney River, Canopy, Lowesville, and Buffalo Mine.

It was built in 1915 to haul chestnut timber out of the heavily-timbered Piney River area to local mills. Timber runs were halted during World War I, since they were not essential to the war effort, and a chestnut blight wiped out much of the timbered areas. Passenger service carried the line through 1936. The line saw a true resurgence when a company began extracting titanium dioxide from the Piney River and needed transport.

Also, three companies were built to extract aplite from the area and used the rail for transport and the line thrived until the late 1960s. Hurricane Camille destroyed some of the tracks in 1969 and Cyanamid, the company that began the line's industrial boom in the 1930s, closed in 1970.

Today, part of the roadbed was developed as a rails-to-trails project. The bulk of the project was funded by the Virginia Department of Transportation. When completed, the entire rail-trail will cover seven miles along the railroad bed to Tye River.

The trail is opened for hiking, biking and horseback riding. The trail passes under tall conifers and other deciduous trees while paralleling Piney River near its north bank with plenty of places to pull off to get closer to the river. Near Rose Mill, the trail passes over a bridge that traverses the Piney River. There are parking lots at both ends of the trail. Parking for horse trailers is available at Piney River. The trail is open sunrise to sunset. 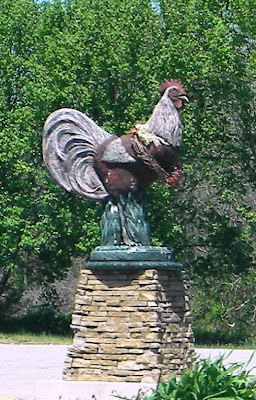 This guy was in front of a service station in Piney River. Now that's some yard ornament!

AACK! I am so thankful you posted this! My husband and our three youngest stumbled upon this on a drive last year. We walked a bit of the trail and thought, "We have to do this with all the kids!" (My parents had the olders.) Then I promptly forgot where on earth it was, the name of it, etc.

You come to the rescue again!!!

So here's my next 2 questions: Do you know when the rhododendrons will be in bloom on Goshen Pass?

And do you have any suggestions for nearby national parks to check out this week (entrance free week)?

You know I love your blog. You are our source for adventures!

Thanks, Rachel. I love roaming the back roads and discovering more about Virginia and surrounding areas.

The rhododendrons bloom in Goshen Pass in June, a riot of blossoms that caused VMI professor/ Pathfinder of the Seas Matthew Fontane Maury to request that his body be carried through Goshen when the rhodys bloomed on the way to his final rest place in Richmond, and his request was honored.

Shenandoah National Park is my first choice for fee-free days -- there's so much to do there from hiking to picnics to checking out the now-open Big Meadows Visitor Center and checking out Skyland.

Also Appomattox is fee-free this week which may be interesting if you've studied Civil War history.