If you live in Virginia, you're in black bear country

Our friends over at the Virginia Department of Game and Inland Fisheries remind us that it's black bear season in Virginia. While we're used to seeing bears in the mountains and surrounding areas, they can show up just about anywhere in the Commonwealth.

If you have bird feeders, garbage cans, compost piles, and fruit trees, you could have bears. Same with outdoor grills, outdoor pet or livestock food, and beehives ... they could attract bears.

My friend Barb who lives in the eastern part of Augusta County just below Shenandoah National Park saw her outdoor spotlight click on one night last year and when she looked out the window to see what had triggered it, there was a big old black bear that had knocked her bird feeder to the ground and was sprawled out scooping up seed. She didn't refill the feeder but the next night the bear returned looking for his smorgasboard only to find nothing but a few seeds in the grass. He returned the third night to nothing and then did not return after that. Barb didn't keep the food source available and discouraged the bear.

Another friend who lives a few miles away lost her pet goats to a black bear several years ago. Our neighbor across the street had a bear trying to get into his storage building in the middle of the night in 2006. In 2006, an Augusta County resident came face-to-face with a black bear. 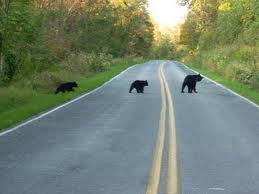