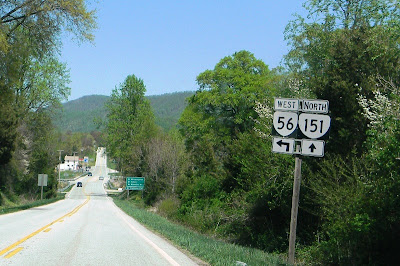 Saturday we went exploring on the southern end of Rt. 151  on the eastern side of the Blue Ridge Mountains. Spring has arrived in that part of Virginia ... trees have leafed out, dogwoods and red buds were blooming, and the grass had greened. With temps in the 60s, it was a gorgeous spring day to be out and about. After taking the Blue Ridge Parkway from Afton to Reid's Gap, then hopping off to drive down past Wintergreen to Devil's Back Brewing Company, we took Rt. 151 south to Rt. 29, then turned around and started back because I wanted to take Rt. 56 up to the Parkway on our path back home. As we headed north on Rt. 151, here was our turn....

As soon as we turned onto Rt. 56, this vista was before us ... green fields and farms and the Blue Ridge Mountains. Beside us was the almost-to-the-top-of-the-banks Tye River. 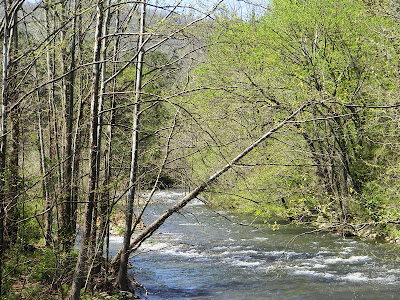 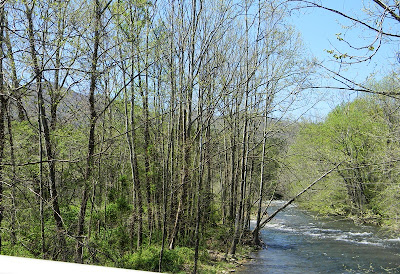 This is apple country with many orchards and nurseries in the area. Just beyond this point, Rt. 56 begins its climb into the mountains.