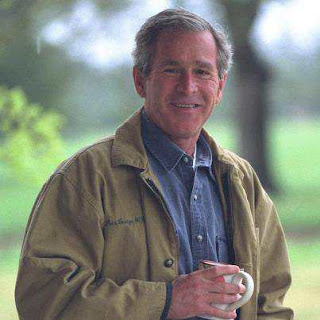 
George W. Bush, not Barack Obama, is the real American hero in Africa.

Take it from me, a liberal Democrat who voted for Obama twice. I know a little about Africa: I have been to the continent 17 times over the last 32 years.

She ended her article with a thank you to 43:


... this liberal commentator thanks president and Mrs. Bush every single day for their amazing and tireless work for humanity.  They are wonderful role models for future leaders around the world.  I wish more leaders would follow the shining example of George W. and Laura Bush.

In the article, Ratner talks about her interest in South Sudan, that civil war-ravaged country, and how they have benefited from financial help pledged by President George W. Bush during his administration. It's a fact the African nation and her people recognize and are appreciative of, as Radner notes:


In fact, South Sudanese today are thinking more about another U.S. president: that would be Obama’s predecessor, Bush 43. As a liberal Democrat and Obama supporter, I was particularly struck by this. Yes, Bush is a hero in Africa, and Americans, too, should know why.

No American president, before or since, has had Bush’s vision and determination to save so many millions of lives.

For Africans, that vision traces back to the early years of his presidency. In his 2003 State of the Union Address, Bush introduced the "President's Emergency Plan for AIDS Relief" (PEPFAR.)

And that proposal had real meat: $15 billion over five years, as well as a serious look at African health problems, beyond HIV/AIDS.

Bush proposed it, and his proposal wasn’t just a few throw-away lines in a speech; even as the Iraq war raged, Bush spent precious political capital to get PEPFAR enacted.

The result was the largest upfront contribution ever made by any country to fight HIV. And the numbers are staggering.

Five million children, women and men have received antiretroviral treatment under PEPFAR. In 2010 alone, 600,000 pregnant mothers received treatment so their newborn children would not be infected.

Ratner give credit to the President for his vision:


Orphans turning to theft or even worse can destabilize communities and countries.

George W. Bush saw this, too. He had a vision. He understood what saving lives would mean not only to the individuals and families saved, but also to the communities who have experienced so much death from HIV. As a result, a whole continent is much better off, including my beloved South Sudan.

Bush 43 is no longer president, of course, and yet his great work continues. Even as his presidential library is dedicated in Dallas on Thursday, April 25, he is still looking to mobilize resources to make real change in Africa.

Ratner is the latest in a line of liberals who have shown surprised gratefulness to George W. Bush's work in Africa and, while it is nice to hear their praise, it's sad they did not recognize and write stories about this side of the 43rd president while he was in office.
Posted by Lynn R. Mitchell at 4/28/2013 11:07:00 PM