'What a headache!' Downy woodpecker flies into glass door 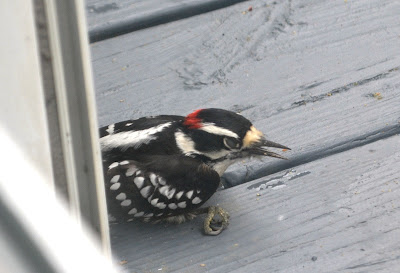 I was sitting at my laptop writing Monday afternoon when I heard a "thwump" followed by the sound of something rolling off a wall or on the floor. The sound came from the dining room/deck area so I walked in and immediately went to the glass doors. Glancing out on the deck, I saw nothing so looked up at the glass. 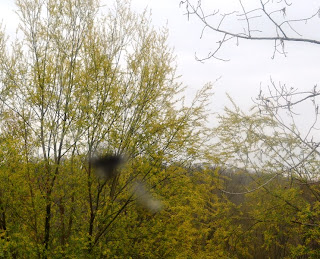 Sure enough, there were tell-tale feathers stuck to the window. My eyes immediately went back to the deck floor ... nothing ... and then I leaned out and looked directly down. There against the bottom of the door was a downy woodpecker, beak parted and panting as he caught his breath from such a hard knock against the door. We've had a few birds over the years fly into the glass windows and doors of the house, and all but one eventually flew away.


I grabbed my camera and went back to see how the little fella was doing. His wings were drooping but didn't appear broken, and he seemed to be just winded. 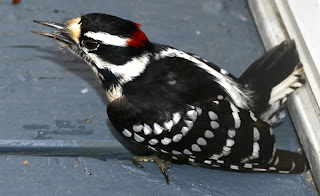 I took a few pictures but left him as he was, not touching or moving him. 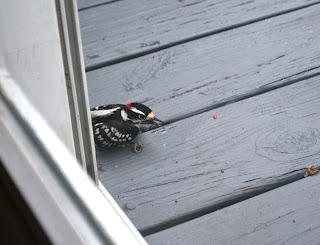 He sat for about ten minutes and got his wits back about him. When ready, he flew to a nearby tree branch and lit on it to look around. I returned to my work and a little later checked back to find he had flown away. He will need a bottle of Tylenol tonight and, boy, will he have a story to tell around the dinner table!