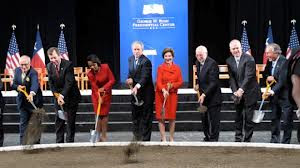 The George W. Bush Presidential Library is ready for its dedication on April 25, 2013, and it will open knowing the lofty fundraising goal of $500 million set by the former President has been surpassed. It is one of the most successful post-presidential fundraising events ever.


About half of the lump-sum will go toward building the library and museum on Southern Methodist University’s campus in Bush’s honor. The building will be dedicated April 25 and opened to the public the beginning May. Some of the funds will go to a mandatory endowment to the government and yet another portion will be gifted to the University, and the rest of the money will go to the George W. Bush Institute, a public policy center in Dallas founded by the former president and his wife, Langdale told Time.

Under construction for two years, the presidential library, museum, and policy institute sits on 23 acres at Southern Methodist University. More than 43,000 artifacts from the Bush presidency as well as numerous records and documents will be included.