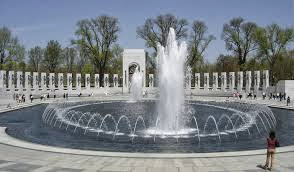 They fought for their country at a time when the world was in tumult, and are now in the twilight years of their lives. On Tuesday, when the U.S. Government shut down, 72 World War II veterans from Mississippi were scheduled to visit the World War II memorial in Washington, D.C.

Because government was shut down, the memorials were closed at a time when the gentlemen were there to visit, possibly the only chance in their lifetimes.

And so they visited anyway. In news that flew around the internet on Monday, the veterans pushed through barriers that were then set aside to allow 80 elderly veterans in wheelchairs to see the memorial erected in their honor by the people of America.

They ignored park police, pushed aside the barriers, and wheeled in anyway, these Honor Flight vets. Stars and Stripes reported one veteran's response:


“We didn’t come this far not to get in,” one veteran proclaimed.

The scene was both emotional and comical at once. After it was clear they had lost control of the situation, Park Police officials stood aside, telling press that they had “asked for guidance on how to respond” to the breach of security.

As 80-something veterans slowly walked around the massive war memorial, Park Police stood quietly to the side, advising other tourists that the site was technically still closed. But they made no moves to stop the wishes of the war heroes.

It was the right thing to do.