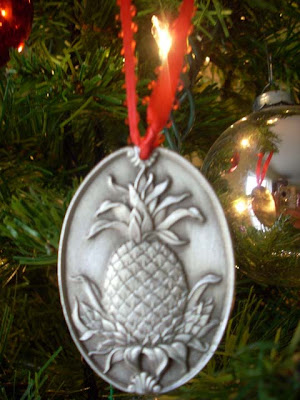 The Pineapple ... a Colonial symbol of Southern hospitality. 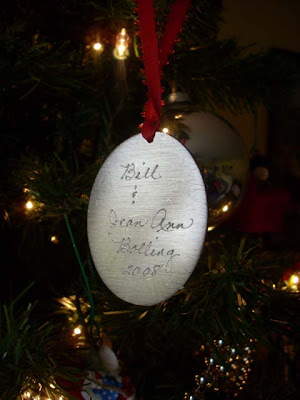 When Bill Bolling became Lt. Governor of Virginia in 2005, he began a tradition of giving pewter ornaments to activists at the Republican Advance. The ornaments, hand-crafted by Virginia Pewtersmith in Richmond, have all represented something about the Commonwealth ... and this year's ornament was no different.

The card enclosed with the ornament said:

In Colonial America, the pineapple held a prominent position either over the doorway welcoming friends, or at the dining table as the visual keystone of the upcoming feast. Its rarity, expense, sweet reputation and striking visual attractiveness showcased the hostess' personality and family values.

Today, it still represents the founding fathers' abiding commitment to hospitality and friendship as well as the fondest memories of families, friends and good times at gracious home gatherings.

My parents went home from the Advance with their ornament from Bill and Jean Ann Bolling, which I am sure is on their tree by now, and my special ornament is hanging near the top of my tree.

Our thanks to the Bollings for the gracious and thoughtful addition to Republican Christmas trees throughout Virginia. Merry Christmas!

Very cool. I'll put it on my tree for years.