Christmas in Staunton ... "The Underpass" ornament 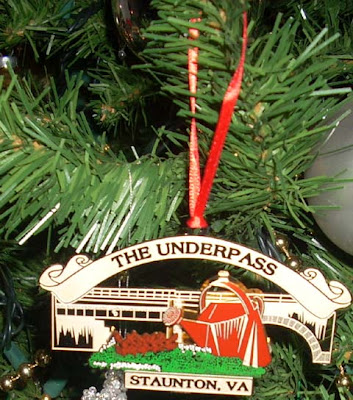 The Staunton Junior Woman's Club's 2008 Christmas ornament commemorates one of the city's most memorable landmarks: the railroad underpass and the huge, oversized watering can.

SWAC Niece has been traveling to my house since she was a little girl. She would always go to sleep on the two-hour trip from Richmond but would wake up as they drove through Staunton. When she saw the watering can at the underpass, she knew she was almost to Aunt Lynn's house.

The Staunton Underpass and Watering Can

The Staunton Underpass is the gateway into Staunton's Historic Wharf District. The Chesapeake and Ohio Railroad established the bridge to bring trains into the historic railroad station in 1854. The Station and Railroad played an important economical and historical role in the development of Staunton. The track is still in use today by Amtrack. Amtrack stops at Staunton's railroad station three times per week in each direction on its route between Washington, DC, and Chicago.

The Water Can, placed at the Underpass, has been greeting visitors to Staunton's historic district since the mid-1990s. It has been given the official title of the World's Largest Watering Can. The Staunton Watering Can sculpture was created by local artist Willie Ferguson. The Water Can is approximately 18' tall and 20' wide and is surrounded by beautifuld isplays of seasonal flowers; in 2004, the City of Staunton received a Keep Virginia Beautiful Award for the display. The Watering Can and Giant Flower Pots were created to honor local humanitarian Barbara Hunter Grant.

Ferguson has many other large sculptures around the Staunton area including an open book at the library, crutches at the hospital, and a giant boot at his shop.

Christmas 2008 ... The Underpass and the Watering Can.