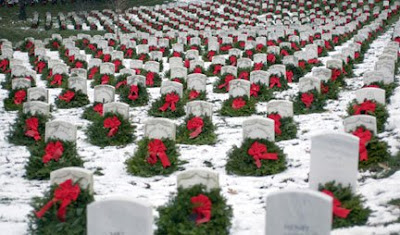 One man's mission to remember that freedom isn't free...

Worcester Wreath’s involvement with the Arlington National Cemetery project was inspired at the early age of 12 years old when, as a Bangor Daily News paper boy, Morrill won a trip to the Nation’s Capital. It was a trip he would never forget, and Arlington made an indelible impression. In later life, he recognized that his success as businessman was in large part, due to the values of this Nation and the Veterans who made the ultimate sacrifice for their country.

Never a veteran himself, for fifteen years now Morrill has committed himself to remembering and honoring those who keep this country safe, with a simple wreath laid down for the holidays.

Born in Jonesport, Maine, in 1949, the fifth child of Wilbur and Florence Worcester, Morrill was raised as an early entrepreneur on the farms of his youth, and graduated from Narraguagus High School (Harrington, ME) in 1968. Morrill and his wife Karen, reside in Columbia Falls, and are the parents of six children. He is a 1973 graduate of the University of Maine, with a Bachelor’s of Science in Animal and Pre-Veterinary Science.

With over 35 years of business experience, the diverse ventures of Morrill Worcester make up one of the great entrepreneurial stories in the economy of Eastern Maine. From agriculture, manufacturing, construction and power generation to professional basketball and industrial baking, his collective enterprises past and present make up the second largest employer in Washington County.