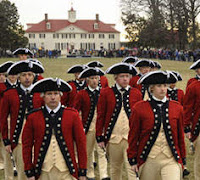 On Monday, February 18, admission to George Washington’s Mount Vernon is FREE for everyone! Celebrate Washington’s 281st birthday with musical and military performances by the U.S. Army Old Guard Fife & Drum Corps, a wreath laying ceremony at Washington’s tomb, and an encore surprise birthday party for the “General."

Schedule of Events
8:00 a.m.
The estate will open one hour early on FREE day!

10:00 a.m. – 10:30 a.m.
Presidential wreath-laying ceremony at the Tomb
A Military District of Washington representative places a wreath from the 44th President of the United States at the Tomb.

12:00 p.m. – 1:00 p.m.
“As I Know Him” in locations around the Historic Area
Come listen as eople from Washington’s world share personal stories about the "General" and encourage guests to submit their stories about Washington for the afternoon program.

2:00 p.m. – 2:30 p.m.
“General Washington, We Honor You” on the Bowling Green
People from Washington’s world gather with guests to share selected stories with the "General," who reflects and speaks to the assembly. Selections of guest-submitted stories will be read aloud.

Email ThisBlogThis!Share to TwitterShare to FacebookShare to Pinterest
Labels: Virginia Is For Lovers