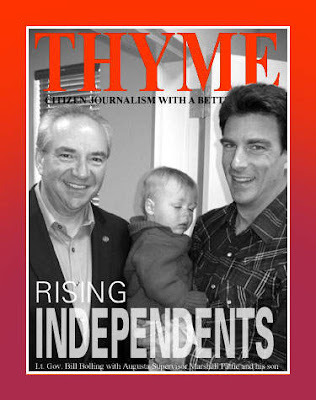 SWAC blogger Bob Kirchman's latest issue of his Thyme Magazine has a photo on the cover of Lieutenant Governor Bill Bolling standing with Augusta County Supervisor Marshall Pattie with the title, "Rising Independents."

The photo was taken by Bob last October when the Lieutenant Governor addressed an overflow crowd at SWAC Breakfast. Sadly, two months later the LG would suspend his campaign for Governor after a farther right-tilting takeover of RPV's State Central committee and an unprecedented reversal of a vote for a primary was changed to a closed convention.

Bob revisits Augusta County's rising Independents who ran in 2011 for the Board of Supervisors. Bob wrote:


In 2011, in the wake of a flawed assessment process and a host of other concerns, David Karaffa, Kurt Michael and Marshall Pattie, along with sitting supervisor Tracy Pyles had begun their respective campaigns as independents promising just such open debate.

That fall, those candidates knocked on thousands of doors. Working against the well-funded Republican and Democratic establishments, they were determined to reach out to all the citizens in a county that was facing its fair share of issues and financial problems. As Bob wrote:


Capitalizing on the feeling of disenfranchisement many had after the assessment debacle, the independent candidates laid out a comprehensive overview of the issues they promised to address. In the end, three of the four candidates Won Seats [click to read]. The campaign showed that, at least on a local level, a richer representation of the people could be achieved.

They were falsely accused by the Augusta GOP Chairman Bill Shirley of representing themselves as Republicans. The newspapers, amazingly, even accused them -- independents! -- of walking lockstep, as noted by Bob:


Though painted as in 'lockstep' by the Media [click to read], the candidates themselves brought a new depth of diverse ideas to the board. Hearty open debate makes for good governance when the parties involved come with a commitment to serve their constituents and address their concerns.

I suppose only those who are hands-on in politics totally understand exactly how un-lockstep it is to not run under the umbrella of the Republicans or the Democrats. After all, those organizations have the money, the man power, the infrastructure for grassroots elections. But it doesn't get any more grassroots than Independent candidates investing old-fashioned shoe leather politics and meeting the voters face-to-face.

Bob suggested a new member of the Independent Club since the Lieutenant Governor is now out of the race to become the Republican gubernatorial nominee. He wrote:


Chris Graham of the Augusta Free Press [click to read] says: "There is a silver lining in the numbers, which have Bolling viewed significantly more favorably than either of the presumptive major-party nominees. The survey from Public Policy Polling had Bolling with a roughly 2-to-1 favorable/unfavorable rating among voters with an opinion of his job performance."

So with McAuliffe and Cuccinelli, the Democrat and Republican presumptive nominees both enjoying much more limited support, here's one analyst who thinks Bolling might be able to pull it off. The trick will be reaching the voters directly in a much larger arena.

What will Bolling do? He has said he will make a decision in March so we, along with the rest of the Commonwealth, will have to wait to see what he decides. Meanwhile, are there other Independents waiting in the wings?
Posted by Lynn R. Mitchell at 2/06/2013 08:04:00 AM

Quote of the Day:

"One of the biggest surprises in office is that constituents were surprised that I would follow through on my promises." -- Marshall Pattie, Augusta County Supervisor for North River District (I)

So, I wish I had actually gone to Mr. Pattie's website before I wrote the article!

That was the thing with all four of those candidates -- they weren't just talking the talk. They were willing to walk the walk, and Marshall's comment proves it. He, Tracy, and David have followed through on promises made, promises kept, just as Kurt would have done.