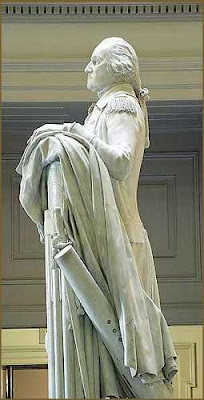 George Washington.
Life-sized marble statue of this famous Virginian, sculpted by Jean-Antoine Houdon,
is located in the Virginia State Capitol.

On this day in 1732, one of the most famous men in America was born. George Washington, a Founding Father, Virginian, first American president, soldier, land owner, and well-respected leader, is remembered by millions as an important man in history.

Apparently not so much at Google where their doodle today is to celebrate what would have been the 88th birthday of the late Edward Gorey.

I didn't. I discovered he was an author and illustrator but wasn't familiar with any of his books.

So while Google celebrates the birthday of Mr. Gorey, many will remember a man who helped shape our country.

Being an obscure illustrator myself, I can appreciate Google's effort to promote Edward Gorey, but it is a shame they have to pass over the man who not only helped shape the young country, but as a very young man, actually helped Survey It [click to read].