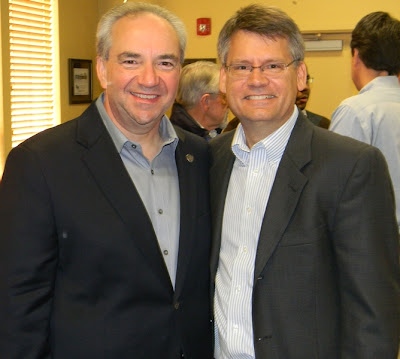 Will Republican Lieutenant Governor Bill Bolling make an Independent run at Governor in 2013?

Addressing the annual Virginia Capitol Correspondents Association dinner Wednesday night, the LG did not give any clues as to what his decision will be but suggested that a decision would be announced on March 14.

After an unprecedented reversal from an open primary to a closed convention by a newly-seated righter-leaning central committee for the Republican Party, Bolling made the decision in December to withdraw from his run at the Republican nomination. His rival was Attorney General Ken Cuccinelli who has been a favorite with the tea party and Ron Paul Libertarians but less popular with the middle-right, Ronald Reagan members of the Party as well as business and community leaders statewide.

Will the 2013 gubernatorial race become even more interesting? Stay tuned....

The Lt Gov has had a long and highly honorable service record with more moments of notoriety than many could recall. I would hate to see it end with what I personally see as a bad decision. He tried to seek his parties nomination and decided not to finish the process. I have my own opinions about the mess that is the aforementioned process. I personally believe that if your not successful at seeking your parties nomination, your done. This is not just some posters opine, I had to personally make a similar decision (on the local level) and thought it was wrong, if the Lt Gov wanted to leave the party and run as an independent, he should have done that. Just to be clear, this post is not a knock on him as I have deep respect for him and hope he either re-commits to seeking his parties nomination or bow out gracefully and pursue therestvof hid life withheld honor and dignity he is known for.