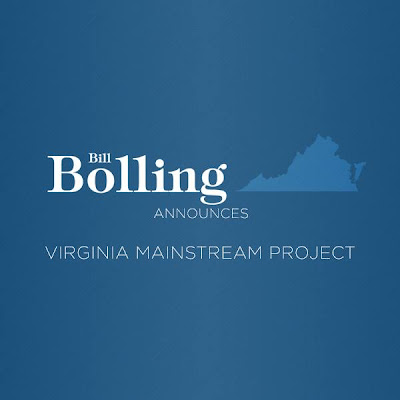 “Politics is not about ideological purity or moral self-righteousness, it’s about governing. And if you cannot compromise you cannot govern.” --Henry Clay

There's a new direction in Virginia politics today, thanks go Lieutenant Governor Bill Bolling who has rolled out the Virginia Mainstream Project that will focus on electing mainstream, conservative Republicans to public office and promote responsible policy solutions to the most important challenges facing the Commonwealth.

Paperwork for the new political action committee was filed on Tuesday with the State Board of Elections.

Bolling, who dropped out of the race in November after a takeover within the Republican Party of Virginia by the Ken Cuccinelli-backed tea party and Ron Paul Libertarians who overturned a vote to hold a primary in 2013 for the gubernatorial candidate, has transferred the remaining assets from his campaign committee to the Virginia Mainstream Project. He will be raising additional funds to help support the important work of this new initiative.

The Lieutenant Governor expressed gratitude for the new adventure, commenting:


“I’m proud to announce the creation of the Virginia Mainstream Project.  As I’ve said many times over the past several months, there is a growing need in the Republican Party in Virginia to recruit and elect mainstream, conservative candidates to state and local office and promote responsible policy solutions to the most important challenges facing Virginia. The Virginia Mainstream Project will work to address these issues while encouraging bipartisan cooperation and compromise on the major issues facing the Commonwealth.  I am excited about this opportunity to continue to serve Virginia and remain actively involved in the public debate.”

The primary missions of the Virginia Mainstream Project include:


1. Recruit, advise and support mainstream Republican candidates for state and local office, with particular emphasis on the House of Delegates in 2013 and the State Senate in 2015.

2. Provide a platform to continue discussing the need for mainstream approaches to governing in Virginia that put policy ahead of politics and seek to promote compromise and bipartisan cooperation to solve the most important challenges facing the Commonwealth.