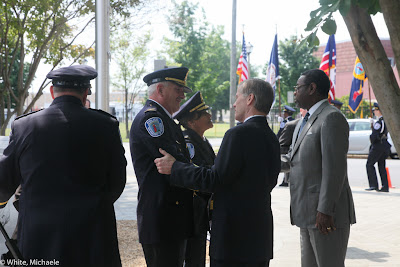 Governor Bob McDonnell and Secretary of Public Safety Marla Graff Decker participated in the Richmond Police Memorial Service Wednesday morning at the Richmond Police Training Academy. Tragically, there were three line-of-duty deaths in Virginia in 2012. An additional two have occurred this year. 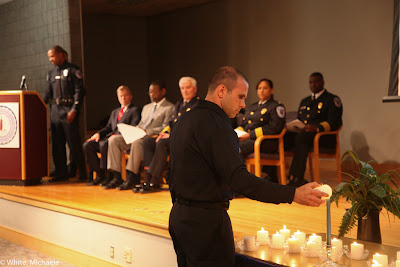 WHEREAS,  the safety and well-being of the citizens of the Commonwealth of Virginia are of the utmost importance to the health, success and livelihood of Virginia's families and communities; and

WHEREAS,  throughout our Commonwealth, thousands of selfless individuals have devoted their lives to protecting and serving Virginia's families, businesses, neighborhoods, schools and communities; and

WHEREAS,  there are currently over 165,000 law enforcement officers in Virginia who are willing to risk their lives twenty-four hours a day, seven days a week in the line of duty to maintain the safety of Virginia's communities while striving to uphold the rule of law; and

WHEREAS,  the courage, dedication, commitment, and leadership of Virginia's law enforcement is an irreplaceable and priceless resource that is vital to ensuring the safety of Virginia's citizens; and

WHEREAS,  there were three line-of-duty deaths in 2012 with an additional two to date in 2013; and

WHEREAS,  there have been 487 law enforcement heroes who have made the ultimate sacrifice while bravely serving our Commonwealth; and

WHEREAS,  it is critical that we acknowledge the dedication of those that continue to serve and who are willing to undertake the crucial roles and responsibilities of law enforcement officers within our communities, and commemorate and honor the dedicated service of officers past and present;

NOW, THEREFORE, I, Robert F. McDonnell, do hereby recognize May 12-18, 2013 as LAW ENFORCEMENT OFFICERS' MEMORIAL WEEK in our COMMONWEALTH OF VIRGINIA, and I call this observance to the attention of all our citizens.
Posted by Lynn R. Mitchell at 5/15/2013 05:45:00 PM