Delegate John Cosgrove has won the Republican Firehouse Primary for the 14th Senate District in the Hampton Roads area by defeating two opponents.

Jim Hoeft has final results at his blog.

UPDATE: Congratulations poured in from throughout the Commonwealth as word spread of John Cosgrove's win.

From Lieutenant Governor Bill Bolling:
"Congratulations to my friend John Cosgrove who won the GOP nomination for the State Senate tonight in the 14th district. John is a good man who deserves our support. Well done John!"

From Randy Marcus, the LG's Chief of Staff:
"Congrats to John A. Cosgrove and his team for a great victory tonight! The Senate and his new district won big tonight. While Sen. Cosgrove has some big shoes to fill, the less numerous body is fortunate to have his leadership coming down the hall."

From Matt Wells:
"Proud to be a small part of a big win tonight. Congrats to John Cosgrove!!"

From Kate Maxwell:
"Congratulations to the next Senator from the 14th District, John Cosgrove!"

From Christie New Craig, Legislative Aide for John Cosgrove:
"My awesome boss John A Cosgrove at his VICTORY celebration." 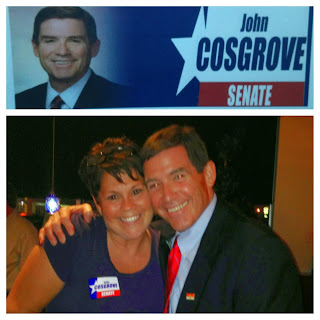