WaPost poll: McDonnell remains among most popular governors in country 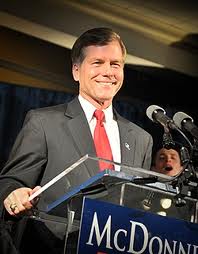 Virginia's Governor Bob McDonnell remains one of the most popular governors in the country, becoming even more so as time passes.

A new Washington Post poll notes that Independents, Republicans, and Democrats approve of the Governor's leadership:


Overall, 64 percent of all registered voters in the commonwealth say they approve of the job McDonnell (R) is doing, up six percentage points from two Post surveys last year. His approval rating is as high as it has been in periodic Post polls over his tenure. The positive ratings cut across the political spectrum, with the biggest improvement coming among Democratic voters. Fifty-two percent of them say McDonnell is doing a good job, compared with 38 percent last September.

McDonnell, who endured scathing criticism from the far-right wing of his party after his landmark transportation bill was passed with bipartisan support in March, has reaped rewards for his pragmatic leadership by looking out for the needs of the citizens of the Commonwealth.

Read the entire poll results at the Washington Post.