Why are American flags at half staff today? 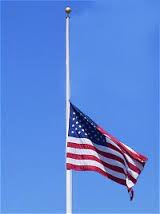 We were out this morning and passed an American flag that was at half staff on the flag pole. I was curious as to why so looked it up.

All fifty states across the nation have their American and state flags at half staff today due to a directive from President Barack Obama who issued a proclamation in honor of Police Week and Peace Officers Memorial Day. Thank you to all police officers who sacrifice for the safety of American citizens.

BY THE PRESIDENT OF THE UNITED STATES OF AMERICA

Day after day, police officers in every corner of America suit up, put on the badge, and carry out their sworn duty to protect and serve. They step out the door every morning without considering bravery or heroics. They stay focused on meeting their responsibilities. They concentrate on keeping their neighborhoods safe and doing right by their fellow officers. And with quiet courage, they help fulfill the demanding yet vital task of shielding our people from harm. It is work that deserves our deepest respect -- because when darkness and danger would threaten the peace, our police officers are there to step in, ready to lay down their lives to protect our own.

This week, we pay solemn tribute to men and women who did. Setting aside fear and doubt, these officers made the ultimate sacrifice to preserve the rule of law and the communities they loved. They heard the call to serve and answered it; braved the line of fire; charged toward the danger. Our hearts are heavy with their loss, and on Peace Officers Memorial Day, our Nation comes together to reflect on the legacy they left us.

As we mark this occasion, let us remember that we can do no greater service to those who perished than by upholding what they fought to protect. That means doing everything we can to make our communities safer. It means putting cops back on the beat and supporting them with the tools and training they need. It means getting weapons of war off our streets and keeping guns out of the hands of criminals -- common-sense measures that would reduce gun violence and help officers do their job safely and effectively.

Together, we can accomplish those goals. So as we take this time to honor law enforcement in big cities and small towns all across our country, let us join them in pursuit of a brighter tomorrow. Our police officers serve and sacrifice on our behalf every day, and as citizens, we owe them nothing less than our full and lasting support.

NOW, THEREFORE, I, BARACK OBAMA, President of the United States of America, do hereby proclaim May 15, 2013, as Peace Officers Memorial Day and May 12 through May 18, 2013, as Police Week. I call upon all Americans to observe these events with appropriate ceremonies and activities. I also call on Governors of the United States and the Commonwealth of Puerto Rico, officials of the other territories subject to the jurisdiction of the United States, and appropriate officials of all units of government, to direct that the flag be flown at half-staff on Peace Officers Memorial Day. I further encourage all Americans to display the flag at half-staff from their homes and businesses on that day.

IN WITNESS WHEREOF, I have hereunto set my hand this tenth day of May, in the year of our Lord two thousand thirteen, and of the Independence of the United States of America the two hundred and thirty-seventh.