RPV Convention: The party of family values is charging for children? 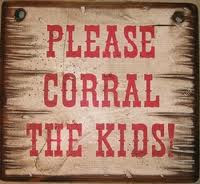 Is the party of family values shaking down families at the Republican Party of Virginia Convention this weekend in Richmond? Some parents may show up today unaware they will have to pay the piper to get their kiddies in the door. Politicians are supposed to be kissing babies, not taking candy from them.

Talk about the difference between conventions and primaries ... it's more convenient for parents to take their kids with them to the polls and pop in for five minutes to vote.

Instead, for the 2013 convention, parents have to drive all the way to Richmond and spend all day (and for those who live long distances, spend the night) and, on top of those costs, they get charged an admission fee for their kids.

Even more alarming is that children are not allowed to sit with their delegate parents. Is it RPV's intention to gather all children under 10 and place them in a designated kiddy area? I can see it now ... hundreds of little ankle-biters running around in a big kiddie corral in the middle of the coliseum with "Don’t Tread On Me" lapel stickers stuck to their little behinds.

Reportedly, there have been requests for months to remove the fee for children but someone obviously decided to hold their ground and be hard-nosed about it. Now the rubber is about to meet the road, and negative feedback is being heard. This will be the Republican convention of homeschoolers because Cuccinelli is a homeschooler ... and that group of voters is usually one-income families and often have many children. There are other ways they could use that money.

The problem first came to light when State Senator Steve Martin, who is a candidate for Lieutenant Governor, discovered he would have to pay a $15 fee for each grandchild in order to walk up on the convention stage with him. That's $45 just for the grandkids to be with their grandfather ... on stage ... where he's running for higher office ... at the family values Republican Party of Virginia Convention.

But get this: for those who missed the early deadline to sign up children, the fee jumped to $25 each, and that has caught some families off guard.

Then there was this post on Facebook by Republican Lee Talley who has a special needs child and took exception to RPV's rules about children:


Saying your kids can't sit with you on the convention floor is insensitive to families with special needs children. You are discouraging yet another demographic from being part of the Republican Party. My son can sit in the Majority Leaders desk in Washington DC but he can't sit with me if I was delegate at the RPV Convention. I'm disgusted and you owe the special needs parents in the Republican Party an apology.

That is a valid point.

As one who has sat on RPV's governing board, I know all about trying to make ends meet for the convention ... but on the backs of families with children?