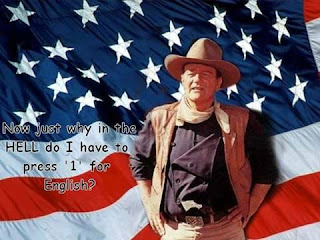 "The gift of a common tongue is a priceless inheritance and it may well someday become the foundation of a common citizenship." --Winston Churchill

Should English be the official language of America?

Just think ... without an official language, government could be required to have all publications and documents available in every language. With 322 languages spoken in the United States, that could be an avalanche of paper -- marriage licenses ... vehicle registrations ... disaster instructions ... IRS filing papers ... voting ballots.


The Democrat mayor of Nashville recently vetoed a bill that would have made English the official language of that city, saying it was "unconstitutional, unnecessary, and mean-spirited."

A Zogby poll from 2006 showed:
U.S. English reports many facts and advantages that support making English the official language.

I love this guy: