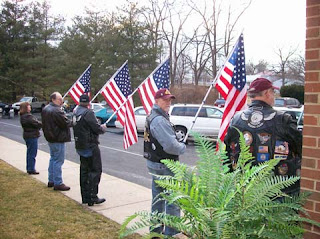 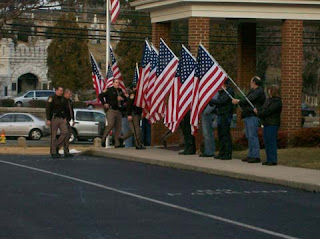 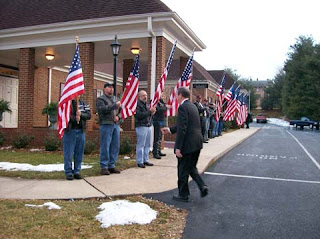 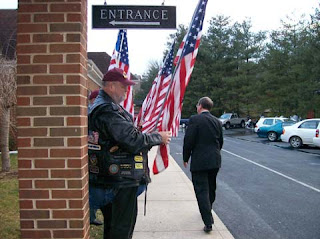 We spent two hours at the funeral home, waiting in line, visiting, watching as friends, relatives, and the community came together to wrap their arms around this young man's family ... and his family was very, very appreciative of everything. There were flowers everywhere including those from Augusta County and Staunton Republicans, and photos and mementos ... a reminder of the young life that had ended too soon ... and a glimpse of how he had grown to become the fine young man he was.

The first sight when turning into the parking lot was the 12 Patriot Guard Riders standing guard at the door to the funeral home holding American flags. What a stirring sight ... how appropriate. I spoke with them, thanking them for what they do. I talked at length with Jim from Roanoke who told me they were there with permission of the family to honor Daniel, and to be a barrier if there were hecklers or anti-war protesters which they were not expecting in this area. They had come from throughout the state and locally.

Congressman Bob Goodlatte arrived around 5:30 to pay his respects to the family, staying a good while and visiting with the family. He had been in the District all day and had driven from Lynchburg, determined to get to Staunton in time. Before entering the building he shook hands with each Patriot Guard Rider and thanked them for being there.

Daniel's mom, Carol, was gracious to all who went through the line that included many relatives -- grandparents, aunts, uncles, cousins. When I got to her I told her my name and that I was with the Augusta County Republicans ... and that we were sorry for their loss and grateful for their sacrifice and they were in our prayers.

I shook hands with each Marine guarding the body and thanked them for their service and told them what they heard in the press was not the whole story ... that many Americans especially in this community were behind them.

What an emotional evening. It centered me to one more be appreciative of what we have in this country ... and how much we owe to our Armed Forces.

The funeral is tomorrow in Raphine at 11:00 a.m. at New Providence Presbyterian Church. The Patriot Guard Riders will be there standing guard ... the Wilson High School Band will be there in uniform (Daniel played trumpet in the marching band) ... the Marine League will be there ... many in the community will attend. Directions to the church are below. 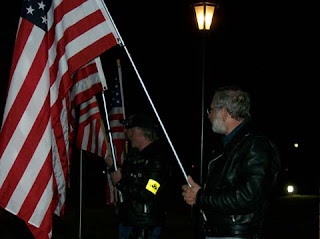 Directions to New Providence Presbyterian Church:
I-81 EXIT 205: USE Rt # 606 West - for approximately 7 miles- thru Town of Raphine, past Wade's Mill to RT# 252 South-a T shape intersection- TURN RIGHT onto # 252-Brownsburg Turnpike- Northward for approximately 1+ miles, New Providence Church is on the LEFT at intersection of # 252/726, a T shape intersection. Parking on both sides of # 726 at Church. (Thanks to SWACer Marbury Seaman for directions.)

That's very sad, but I have to ask you to please not confuse anti-war protestors with whom the patriot fighters are actually protecting the funeral goers from. It's happening all over the country, not just in Virginia, too. There have not been anti-war protestors at funerals of soldiers, there have been those crazy people that are anti-gay, and are for some insane reason they are blaming the military for the "rise of the gay" as they call it. It's very weird, and I forget the man's name but I will try to find it; for some stupid reason, the media keeps giving him attention.

Some of us may be anti-war, but we don't disrupt funerals of the brave men and women fighting for our country, and it just insults me that you would even think we would do such a thing.

Here is what is going on. I have set up a list of feeds of all of the conservative blogs in Virginia at The Virginian Federalist, www.vafederalist.blogspot.com. If you are interested in more than this, a raisingkaine type of blog alternative to the left where each person could post let me know, publiusnva@gmail.com. We can do that too.

There may be another possibility in the works, but it will be down the road. Let me know what you all think. And spread the word about the feeds I have set up. If you know of any I missed let me know.

Some of us may be anti-war, but we don't disrupt funerals of the brave men and women fighting for our country, and it just insults me that you would even think we would do such a thing.

Well, if you make it out to DC on March 17th and even if you're just out there with the hippies, Fonda, Sheehan and co., you are endorsing and abetting in the planned vandalism of our national memorials. Just remember that, k?