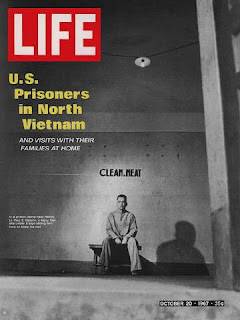 Quick! Someone pinch me! I thought I had a conversation over iced tea with living history ... former Vietnam POW and American hero Paul Galanti....

Not only did we have a discussion but he paid for my iced tea. He ... a Navy fighter pilot who spent almost seven years in a stinking hole in Vietnam as a prisoner of war ... bought me iced tea.

It was I who should have bought him ... the world.

Flash back to 1967, front cover of Life magazine. Seated on a stark wooden bench, alone, in those Asian pajama outfits they wore was a dark-haired young man staring directly at the camera.

I was in 9th grade and our social studies assignment was to keep a running journal of the Vietnam War, collecting newspaper articles and Life magazine photos. I remembered that photo on Life's cover. That young man was Paul Galanti.

Fast forward 40 years to a few days ago in Norfolk, VA ... where that 9th grader, now a middle-aged woman ... and that dark-haired young man, now a 60-something gray-headed gentleman ... were discussing the Vietnam War. I had first met him a month earlier at the War Memorial in Richmond at a George Allen rally. Paul Galanti is the Chairman of Veterans for Allen in this 2006 re-election campaign. The occasion in Norfolk was another Veterans for Allen rally.

Paul Galanti lives in Richmond which is where I grew up. His wife Phyllis was an outspoken advocate during the 1960s and 70s in calling for better treatment of American POWs in Vietnam including her husband. She was famous and a distinct memory from my teenage years.

Commander Galanti was someone I grew up knowing about. He spent my middle- and high-school years as a POW. If I could buy the world for Paul Galanti I would because he helped buy the world for me ... in the form of freedom ... by spending that time in that stinking POW camp in North Vietnam.

From the bottom of my heart I am grateful for every day of freedom I have ... and that my children have ... because of his sacrifice. Thank you, my new-found friend Paul Galanti ... and may God bless and reward you for your sacrifice to America.

I just can't imagine living through what these men did. God bless and keep them always.