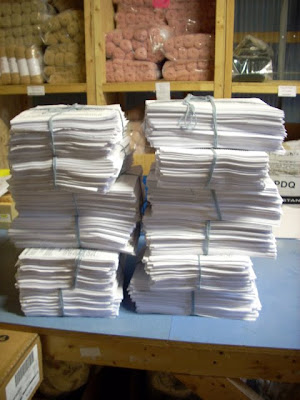 Stacks of petition copies with 10,500 signatures from Augusta County residents are ready for the Court.
The Augusta County real estate assessment lawsuit against the county is back in the news this week as Churchville attorney Francis Chester appears in court on Thursday (see press release below).

Representing 10,500 county landowners, Mr. Chester is working pro bono as he seeks justice for the taxpayers who saw their real estate increase from 30% to 1,000%. Named in the lawsuit were all seven members of the board of supervisors and Commissioner of the Revenue Jean Shrewsbury.

After a March 2009 public hearing on the matter where over 1,000 citizens showed up, many who were locked out of the government center, the supervisors and commissioner of revenue Jean Shrewsbury refused to throw out the outrageously high assessments.

As a result of Mr. Chester's lawsuit, the county has filed a lawsuit against Mr. Chester stating he filed a frivilous complaint and requested financial sanctions (fines) against him for representing 10,500 county residents, a right guaranteed by the First Amendment:

Congress shall make no law respecting an establishment of religion, or prohibiting the free exercise thereof; or abridging the freedom of speech, or of the press; or the right of the people peaceably to assemble, and to petition the government for a redress of grievances.

Is our taxpayer money being used by the county of Augusta and their full-time taxpayer-funded attorney to intimidate citizens who dare to question their policies?

This is very similar to a case in Gloucester where a judge earlier this year fined citizens in a real estate assessment dispute who tried to have supervisors removed.

Has government gotten out of control? Have public servants forgotten that they serve us ... we don't serve them? As a result of actions like this, many Americans feel as if their elected officials are not listening to them and have joined the nationwide tea party movement.

Outrage over real estate tax increases is not unique to Augusta County or even Virginia ... it's going on everywhere.

And don't forget the largest tax protest event ever just three weeks ago with the 9/12 March on Washington when upwards of 1 million+ American patriots marched down Pennsylvania Avenue to the U.S. Capitol.

The following press release was sent to media on September 29:

Churchville attorney Francis Chester filed lawsuit against the Augusta County Board of Supervisors and the Commissioner of the Revenue Jean Shrewsbury to roll back 2009 real estate tax assessments to 2005 levels. As a result, Augusta County filed suit against Francis Chester stating he had filed a frivolous lawsuit and asked the court to assess financial penalties against him.

Although the original 1,200 copies of the tax assessment petitions containing 10,600 signatures were filed with the court, the judge required a separate set of copies of the petitions for each plaintiff in the suit.

Those ten copies -- one for each of the seven supervisors, the commissioner of the revenue, the county attorney, and the court -- and consisting of 86 pounds of paper and numerous reams of copy paper -- will be delivered to the courthouse on Thursday, October 1, 2009, at 1:30 pm.

The public is invited to Thursday's hearing which is to be held at the Augusta County Courthouse at the corner of Johnson and Augusta Streets in downtown Staunton.
Posted by Lynn R. Mitchell at 9/29/2009 10:41:00 PM