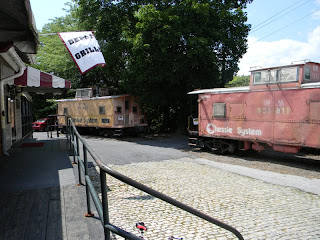 The Depot Grille at the historic train station in Staunton, Virginia.
One of our favorite local restaurants, Barb and I stepped out for some girl talk and good food. That area of downtown is known as "The Wharf" because trains  unloaded goods directly into adjoining warehouses during Victorian days. When the depot was destroyed during a major train derailment at the turn of the century, local architect T.J. Collins designed the current ca 1902 building. 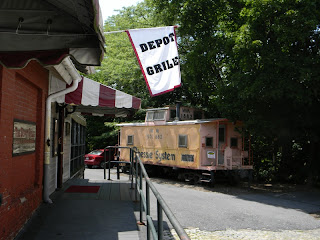 Box cars on old railroad tracks along with the cobblestone drive are reminders of an earlier time in the Queen City. The C&O station was used into the 1960s and renovated in the 1980s. Amtrack and freight trains still run but the depot is now divided into shops and two restaurants. 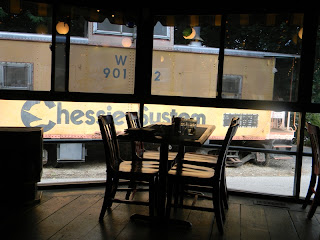 One of the Depot's box cars is visible from the porch area of the restaurant. Behind the photographer is the historic 40-foot bar that was originally located in the luxury Ten Ayck Hotel in Albany, New York. Legend has it that that the Ten Eyck was the official Republican Party watering hole for that State Capitol. The bar was saved before demolition of the hotel and transported to Staunton where it was installed in the refurbished depot. 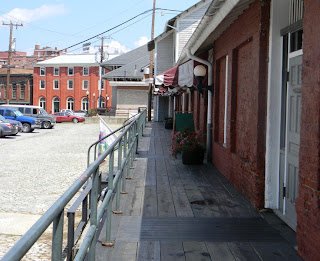 The Staunton Station's board walkway and cobblestone driveway.
Amtrak's "The Cardinal" stops at Staunton's railroad station three times per week in each direction on its route between Washington, DC, and Chicago. "The Cardinal" can be boarded at Washington, DC's Union Station at 10:35 AM on a Sunday, Wednesday, or Friday morning, arriving in Staunton at 2:15 PM that afternoon. Return to Washington is on a Wednesday, Friday, and Sunday afternoons, leaving Staunton at 3:21 PM and arriving at Union Station at 7:30 PM that evening. 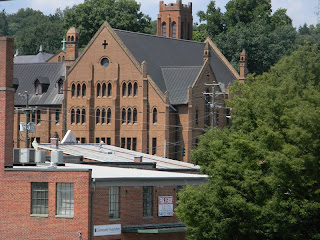 Looking from the train station across downtown Staunton to historic Trinity Episcopal Church ca 1746 with Tiffany stained glass windows and a Pomplitz & Company pipe organ that was refurbished by local internationally-known Taylor & Boody Organ Makers.
Perhaps its main claim to fame was the fact that the Virginia General Assembly members escaped the British army in 1781 by crossing the Blue Ridge Mountains to Staunton. For 16 days, from June 7-23, 1781, the church served as the Virginia state capitol. 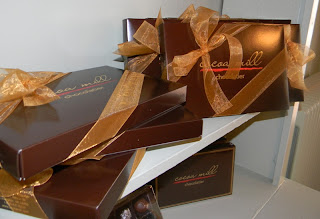 After lunch, Barb and I headed to the Coca Mill Chocolatier shop on Staunton's Beverley Street for something sweet from their selection of chocolate treats. Voted best overall chocolates by the Wall Street Journal in a nationwide surprise taste test, Cocoa Mill also operates a shop in nearby Lexington, Virginia. More photos of this sweet shop are here. 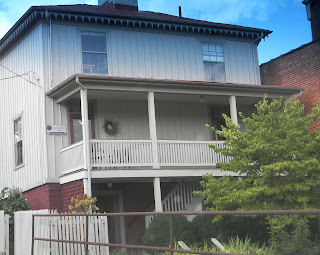 Downtown Staunton' Board and Batten House at 118 West Johnson Street is used as an office building for a local company.

Looking east on Beverley Street which serves as a main street for Staunton. 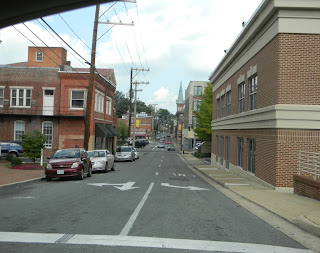 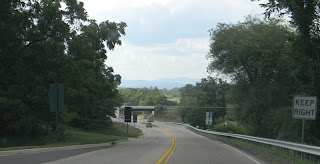 Rt. 250 heading west of Staunton at Rt. 262 bypass intersection. Appalachian Mountains are in the distance. 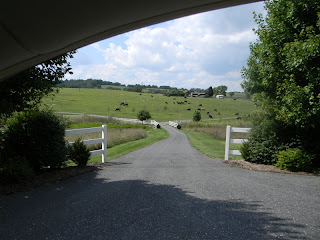