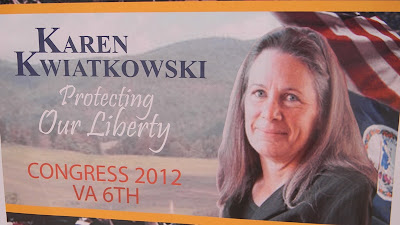 Standing on the steps of the Augusta County Courthouse Thursday in downtown Staunton, against a noisy background of mid-day traffic with two of her four children and several other supporters holding campaign signs,  Karen Kwiatkowski formally announced her candidacy for U.S. Congress.

With a campaign slogan to "Reduce, Redirect, and Rein-In" the federal government and hoping for a series of debates, the Shenandoah County resident is running as a Republican and will seek the GOP nomination in 2012 against long-time incumbent Republican Congressman Bob Goodlatte, 58. It will be the first time Goodlatte has been challenged from within the party since taking office in 1992.

Another Shenandoah County resident, Democrat Andrew Schmookler, announced earlier this year that he planned to run for the seat.

Kwiatkowski, 50, is a retired Lieutenant Colonel who spent 20 years in the United States Air Force who was at her desk in the Pentagon when the terrorist attack took place on 9/11. Self-described as a Shenandoah Valley farmer, military veteran, parent, grandparent, and teacher, she has extensive and varied background in academia and writing.

A Ron Paul supporter, she called herself a "conservative constitutionalist from the liberty wing of the GOP,"  and added, "Certain parts of the GOP talk the talk but don't walk the walk."

She has co-authored a book about Ron Paul and counts his backers among her supporters. Indeed, she was even been mentioned as a possible vice presidential candidate for Ron Paul's presidential run.

Her educational background includes an MA in Government from Harvard, an MS in Science Management from the University of Alaska, completed both Air Command and Staff College and the Naval War College seminar programs, and has a Ph.D. in world politics from Catholic University of America.

Kwiatkowski is critical of Goodlatte, claiming he appears to have lost his conservative roots and bends to the will of party bosses. She did not support his vote for the "fear-driven Patriot Act, violating the Constitution, growing government, and reducing liberty," noting she would fight to repeal it to restore "common sense, Constitutionality, and liberty."

Goodlatte, she said, had pursued a twenty-year career as a member of Congress despite promises to limit his terms. If elected, she would seek to reduce Congressional salaries, end the Congressional retirement program, and demand that Congressmen purchase their own private health insurance.

On defense, she objected to Goodlatte's vote for what she described as the occupations of Iraq and Afghanistan and the attacks on Libya, and viewed much of the US. overseas military budget as wasteful and at times, unlawful. She was also critical of his votes over the years to raise the federal government's borrowing limit "in direct defiance of Virginia's lawsuit against it."

The 6th District nomination will take place next year in a primary or convention. "I must gain the confidence of the people of the 6th District, and I must also gain the confidence of the Republican establishment in the 6th District," she noted. "We have been to many parts of the District in the past few months, talking to people who grew up here, who live here, who work here and who have retired here. What we are hearing is that they are sick of status quo politics. There is a sense that we are being governed by politicians who do not care what we know, what we want, and what we can afford."

More coverage of this event can be found at the Waynesboro News Virginian, Staunton News Leader, and NBC-29. 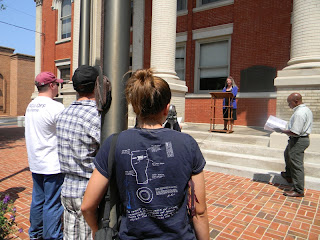 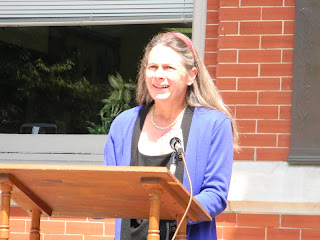