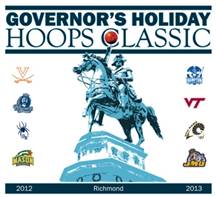 The “Governor’s Holiday Hoops Classic” Matchups
December 2012
George Mason vs. University of Richmond (early game)
The University of Virginia vs. Old Dominion University (late game)
December 2013
Hampton University vs. James Madison University (early game)
Virginia Tech vs. Virginia Commonwealth University (late game)
Speaking about the “Governor’s Holiday Hoops Classic” Governor McDonnell remarked, “Virginia has long been home to some of the nation’s premier collegiate basketball programs. Virginia teams have appeared in Final Fours, won conference championships and are regularly ranked in national Top 25 polls. Unfortunately, given scheduling constraints and conference affiliations, we too rarely get to witness our in-state teams competing against each other. The “Classic” will change that.  In December 2012 and 2013 the Richmond Coliseum will be the site of what are certain to be exciting games which will allow Virginians to celebrate our great colleges and universities while supporting a great cause, the Commonwealth’s Food Banks. I hope the Classic will become a long-lasting Virginia athletic tradition. And, as a father who has had children attend UVa, Virginia Tech, ODU, JMU and VCU, I’m definitely staying neutral in this one!”
The idea for the all-Virginia basketball doubleheader came from an appearance made by then Governor-elect McDonnell on “Sports Phone with Big Al” on ESPN 950AM in Richmond in December 2009. During the segment, host Al Coleman mentioned the Richmond Times-Dispatch basketball tournament that existed from 1976-1991 and regularly brought top Virginia programs to the Coliseum. Coleman noted the broad interest in getting such a tournament back in action, especially given the recent and historical successes of Virginia schools on the court. The “Governor’s Holiday Hoops Classic” is the result of that conversation.
Details regarding tickets and exact game times will be released in the spring of 2012 and 2013 for each year’s “Classic.” Corporations and individuals interested in sponsorship opportunities can email: GovernorsClassic@governor.virginia.gov for additional information.
Virginians can visit http://www.governor.virginia.gov/hoops-classic, to sign up for updates in the months ahead regarding the “Classic.”
Posted by Lynn R. Mitchell at 8/10/2011 10:49:00 AM