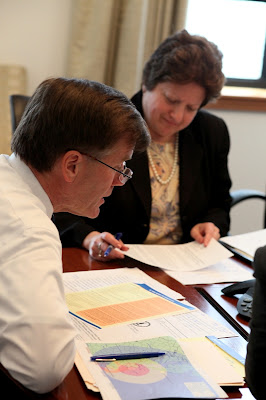 Governor McDonnell and Virginia Secretary of Public Safety Marla Decker
(Photo Courtesy of Michaele White, Governor’s Photographer)
Called one of the strongest hurricanes to ever hit the coast of Virginia, emergency management officials in the Commonwealth along with Governor Bob McDonnell (R) said in a Thursday afternoon press conference that the state has been preparing for Irene. He was joined by those in charge of public safety, homeland security, VDOT commissioner, the superintendent of State Police, and health and human resources who are concerned first and foremost about public safety.

McDonnell expressed appreciation for all helping to distribute important information to the eight million Virginia citizens, many of whom are likely to be in harm's way over the next few days.

He stressed that Hurricane Irene is a very dangerous storm. Many meteorology models are now showing it on a path that would affect eastern Virginia and significantly impact the Eastern Shore, Tangier, and other coastal communities. Citizens need to immediately prepare, if they haven't already, for impact on their areas.

McDonnell warned that citizens should expect the impact of the storm to begin Saturday morning and continue through Sunday and said they could go to www.readyvirginia.gov for more information.

The eye of the storm at this time is expected to be at the NC/VA border at 2:00 a.m. on Sunday. Impact could last 30 hours with tropical storm force winds in and around the coastal areas of Virginia. If the hurricane tracks more west, it will impact more of the Commonwealth.

The Governor issued a State of Emergency on Thursday to activate a variety of plans that state and local governments are taking. He also penned an order allowing localities to issue mandatory evacuations at their discretion based on conditions of wind, storm surge, and other factors. The Governor retained the right to personally order evacuations if needed in the interest of public safety. Public emergency officials have been briefed all day on the storm and are communicating with other emergency departments around the Commonwealth.

The state emergency center was activated earlier this week when a 5.9 magnitude earthquake shook the state. It remains open, available 24 hours a day, in readiness for Hurricane Irene with an evacuation team in place.

Virginia State Police have placed personnel on standby and stationed them in areas where they may be needed particularly in the eastern part of the state. They will be moved to new localities as the projected path of the hurricane becomes better known. The Department of Forestry is in place with chainsaws for debris removal which is anticipated to be a big need due to high winds and heavy rain with many down trees.

The Virginia Department of Transportation will be monitoring highway conditions. The Governor stressed the importance that people know there will be road, bridge, and tunnel closings that may begin as early as Saturday morning. Those closings will take place when tropical storm force winds of 39 mph hit the area so residents need to get supplies and prepare early to avoid being on the roadways at that time.

Virginia's National Guard has been authorized by McDonnell to bring in as many as 300 active duty personnel with the authority to call up another 200 as needed. The Department of Health is working with hospitals and emergency facilities as they prepare for the weekend event.

McDonnell has been in contact with federal and state officials to coordinate emergency responses, and has had offers of help from governors elsewhere, including Rick Perry of Texas, to work together to plan and cooperate for the aftermath of the storm.

Emergency officials will continue to monitor the storm regularly with updates on storm track data from the National Weather Service. Residents, it was stressed, need to take the storm seriously. Estimated to be a category 2 or 3 by the time it hits the coast of Virginia, there's the chance of significant strengthening in the warm off-shore waters. A wobble to the west could cause significant impact farther west in the state so residents are urged to monitor TV and radio stations for information and to know the location of shelters. They are urged to plan for electrical outages and to be prepared with alternate sources of power. All are asked to stay off the roads on Saturday and Sunday until debris is removed.

Low-lying areas may have mandatory evacuation orders from local governments with significant flooding likely at high tide. A FEMA team will be in place to help those in need.