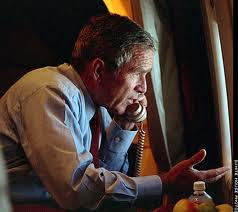 "I will not forget the wound to our country and those who inflicted it. I will not yield, I will not rest, I will not relent in waging this struggle for freedom and security for the American people."
- President George W. Bush, 2001

This is one of my favorite photos of President George W. Bush. Taken on Air Force One in the hours after the 9/11 terrorism attacks, he and his advisers were busy working to protect American citizens after the disaster that had come to our shores.

Sunday night the National Georgraphic Channel will air "George W. Bush: The 9/11 Interview" to kick off its series of remembrances on the 10th anniversary of the tragedy that killed 3,000 innocent people and set in motion military action and a war in Iraq and Afghanistan.

Reuters gave details of the interview that took place in May of 2011:

The special includes footage from behind the scenes on that historic day that changed America, the world, the American people, and a president who had been in office only eight months but who was determined that his most important priority was the safety of the American people and the homeland. Mission accomplished. For that, we are eternally grateful.
Posted by Lynn R. Mitchell at 8/26/2011 09:00:00 AM