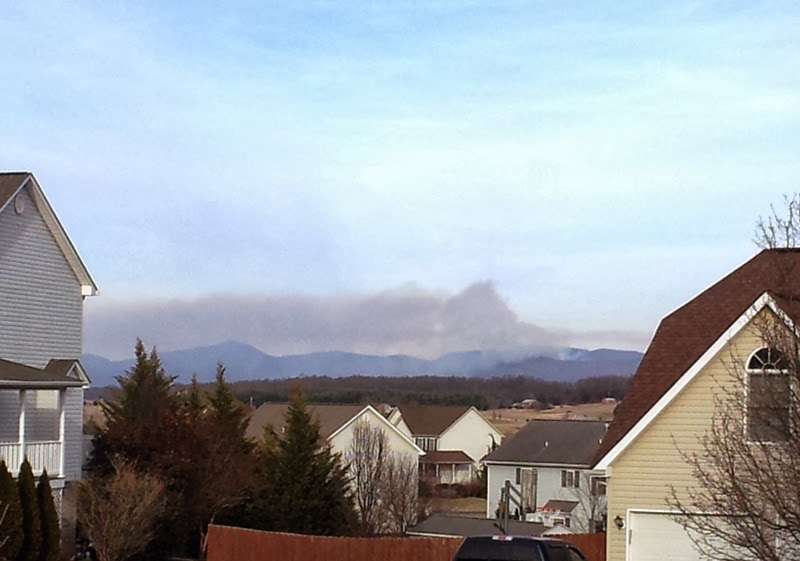 Around 3:45 Friday afternoon my friend Pam Michael looked out the window of her house and saw large plumes of white smoke rising on the Blue Ridge Mountains north of Waynesboro. About 45 minutes later her husband Kurt took photos and emailed them over.

The fire is in the south district of Shenandoah National Park about Milepost 90 which is north of Waynesboro and south of Crimora, according to the Shenandoah National Park Facebook page. While the fire has not affected Skyline Drive at this time, three trails have been closed: Rip Rap, Wildcat Ridge, and Rocks Mountain. These closures will remain in effect through the weekend.

Update #1: The fire has been pinpointed east of Crimora in northeastern Augusta County.

Update #2: At 5:00 Saturday afternoon, the Park Service reported, "Paine Run Trail is now closed due to the fire. Latest estimate is 130 acres."

Update #3: Saturday at 8 pm, the Park Service reported, "Final update for tonight: Some firefighters will be monitoring the fire through late evening, Saturday March 1st. Crews will return in force on Sunday morning."

Update #4: Sunday at 5 pm from the Park Service: "The Rocks Mountain Fire in the southern third of Shenandoah National Park remains within the park’s boundary. Firefighters ensured containment lines were as secure as possible and then were sent to their homes as the winter storm approached the area this afternoon. Park fire managers will monitor the fire and plan for continued actions depending upon the effects of the winter storm. Estimated at 150 acres."

Update #5 - March 7, 2014: From Park Service: "Shenandoah National Park personnel have determined that the cause of the Rocks Mountain Fire was an illegal campfire. The fire, which was reported to the park at approximately 3:10 p.m. on Friday, February 28, 2014, had burned approximately 450 acres inside Shenandoah National Park before a winter storm brought rain, sleet and snow to the area. Fire managers visited the fire location just northeast of Crimora, Virginia today and confirmed that a continuous layer of snow still covers much of the incident area. Once the snow melts, firefighters will patrol the area for hot spots. The following trails remained closed: Riprap, Wildcat Ridge, Rocks Mountain and Paine Run."
Posted by Lynn R. Mitchell at 3/08/2014 08:00:00 AM