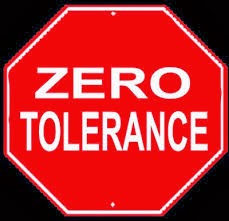 We've heard it over and over but the incidences seem to be growing. Zero tolerance in schools has reached the point of, well, stupid. Bart Hinkle faces it head-on today in the Richmond Times-Dispatch, noting case after case of ridiculous zero-tolerance policy "violations" from honor students,  Boy Scouts, good kids, and little kids, and the narrow-mindedness of school officials who cannot differentiate between the danger in a kindergartner's pop tart gun and the real thing.

The mind, it boggles.

Don't get me wrong. I understand the need for rules about weapons, and I've discussed this with a teacher friend in the past. But zero tolerance should not mean zero common sense.

Hinkle relates case after case of intolerant adults enforcing intolerant rules for behavior that could clearly be seen as an exception to "the rule."

Like the case of high school senior Jordan Wiser of Jefferson, Ohio, "who spent 13 days in jail on a felony charge because he drove onto school property with a pocketknife in the trunk of his car."

Let's take a minute and let that sink in. Thirteen days. In jail. For a pocket knife that wasn't even in his bodily possession but locked in the trunk of his car.

That's not the worst of it. Jordan's pocket knife was in his EMT vest. That's right ... he volunteers as an Emergency Medical Technician. Now his desire to join the Army after completing school is in jeopardy.

As if that wasn't bad enough, it gets worse. A March 18, 2014, article written by Professor Jonathan Turley, a high profile lawyer who has documented extensively about zero tolerance policies and the damage they have done to law-abiding students caught up in the madness, explored the case of Jordan Wiser:


... the school officials called police after searching the trunk of a locked car to find a pocket knife used by a senior in his work as a EMT. He was then fed into a legal system that refused to show discretion in his prosecution. Notably, prosecutor Harold Specht ran for office based on a pledge that he would maintain a “hardline, zero tolerance policy” as a prosecutor. It was the perfect storm for Wiser: zero tolerance administrators handing a student over to a zero tolerance prosecutor. But it gets worse...

Wiser may now be barred from fulfilling his dream of joining the Army. School officials say that he consented to the search but Wiser insists that he declined to give consent and asked to speak to this parents or a lawyer. School officials searched the car and found the small folding knife and an airsoft gun. (The airsoft gun was legal and used in a school club). They say that they had probable cause after monitoring comments Wiser made on an online forum. They specifically referred to videos that Wiser posted on YouTube discussing home defense techniques and self-defense.

The police was called and the school moved to expel him.

He was then charged with an illegal conveyance of a weapon for the knife.

He now must enroll in a special online program to complete his education.

What the heck kind of message is that sending to our young people? Even more, how can adults participate in such injustice with clear consciences?

The sad part of this case is that Jordan has been barred from seeing his grandfather who is dying:


To make matters even worse, the conditions of Wiser’s bond prohibit him from having contact with his grandfather at his home because of the presence of guns in the home. His grandfather is dying from cancer.


The first judge ordered Wiser to be held on a half million-dollar bond and a psychological evaluation. He passed the exam but he was then hit with a $50,000 bond and an ankle monitor on Christmas Eve. It is important to remember that he is not charged with a conspiracy or threat against the school. The charge remains a four-inch folding knife in a vest in a trunk in a locked car in a parking lot outside of the school.

This is just one case. A quick Google search finds dozens of others. Now, however, there are indications that some are beginning to push back against the zero tolerance policy. Sadly, it's too late for students caught up in this failed attempt to make schools safer, the kids who have been suspended, expelled, and in the case of Jordan -- jailed.