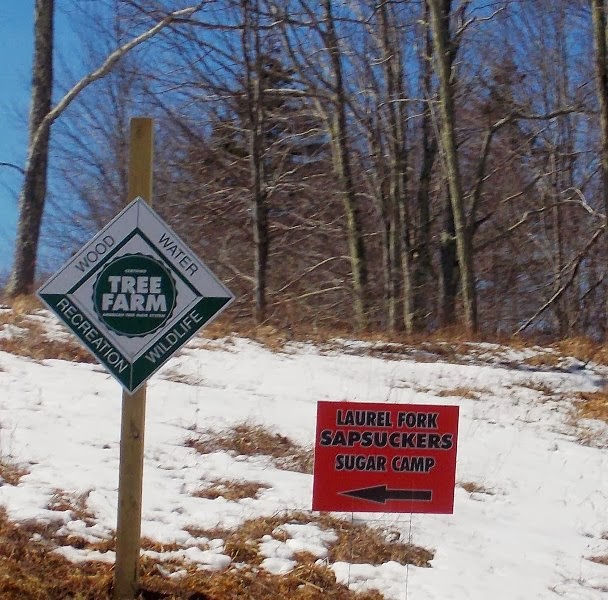 Okay, these guys get the prize for best view ... and that's saying a lot in Highland County where it's impossible to find a bad view. Located on top of Alleghany Mountain that straddles the Virginia-West Virginia line ten miles west of Monterey, Laurel Fork Sapsuckers has the highest elevation of the seven sugar camps. How high? Try 4,400 feet. The breath-takingly spectacular scenery alone is worth the drive. They are also the newest camp. The land has been in the family for four generations but the camp has been operating only since 2010 and features eighteen acres of sugar maples. This was our first visit but it won't be our last.

Earlier in the day we had been to Duff's Sugar House south of Monterey so when we left we took Rt. 84 from Duff's to Rt. 600 at Back Creek and followed it north to Rt. 250, a drive we've done many times in the past. The pavement turns to gravel as this scenic back road climbs the ridge that parallels the Back Creek valley, and it was muddy and soft in many places but frozen over with ice in others. When we emerged onto Rt. 250, it was only a few miles further west to Laurel Fork Sapsuckers Sugar Camp. Why not, we thought ... let's go!

First thought when we turned at the very unassuming looking yard sign that said "Laurel Fork Sapsuckers": top of the world. Second thought: oh my gosh, there's so much mud. The sun was shining, snow was melting, and the parking area just off Rt. 250 was soft as we backed into a grassy-muddy spot. A young man was standing nearby, dressed for the cooler-than-Monterey weather at that high elevation, and he walked toward us as we tried to get our bearings. Where was the sugar house? Where were the people? All I saw were a couple of parked cars, what looked to be an abandoned house, and mountains as far as the eye could see. 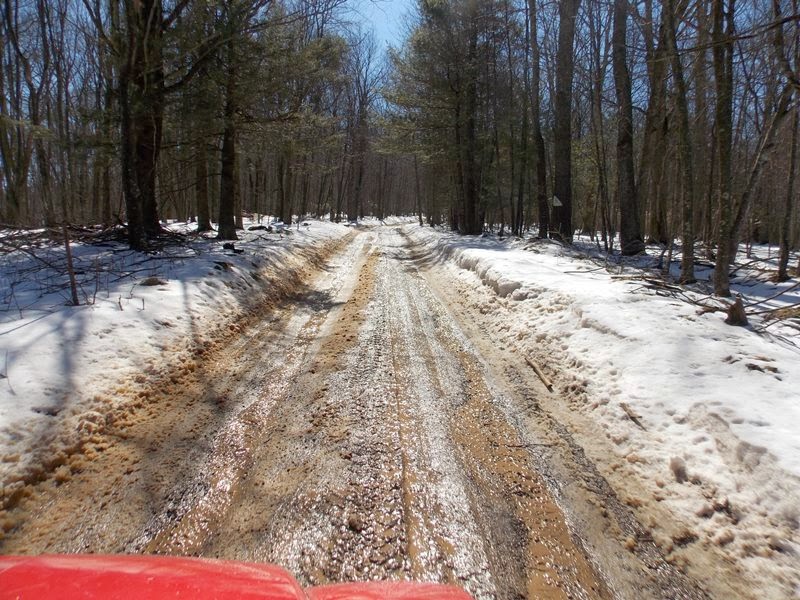 The young man was named Ladd and he pointed toward the road that continued up the mountain beyond the parking lot and disappeared into the snowy woods. That's where everything was located, he told us. The road was bordered by snow which made it a gully that had a river of water coming down.

Ladd smiled, his rosy outside-in-the-cold cheeks glowing in the sun, and said, "I can take you up," and pointed to a (gasoline engine) mule. I asked how far. "About half a mile," he answered. He pointed to the seat. Mules are generally two-passenger -- driver and guest -- with a cargo area in the back, and his was loaded with something back there. Patting the seat where there was a hump between the two sides of the seat, he smiled and said, "One can sit here." On the hump, he meant, in order to get three of us on the two-passenger seat.

I looked dubiously at the muddy river-er-road that led to the sugar camp, looked back at our car, and then my eyes wandered out again at the breath-taking scenery that looked east into Virginia and west into West Virginia. That was it ... I was smitten. My curiosity was piqued as to how much higher up this mountain he would take us and what, exactly, was there. I've never met a back road I didn't want to explore so grabbed my camera and extra batteries from the car, put on my coat, and loaded into the mule with my husband and Ladd. And off we went on an adventurous drive in the cold mountain air that had us all laughing. It was exhilarating. 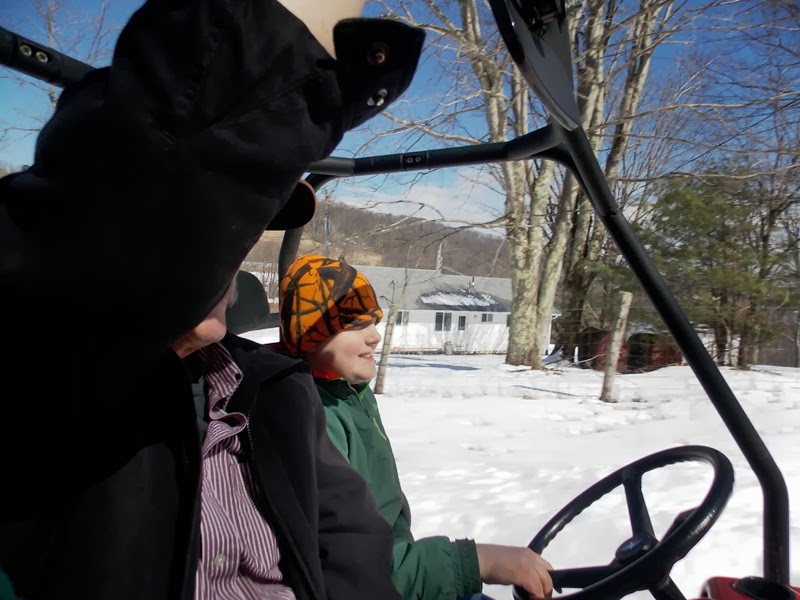 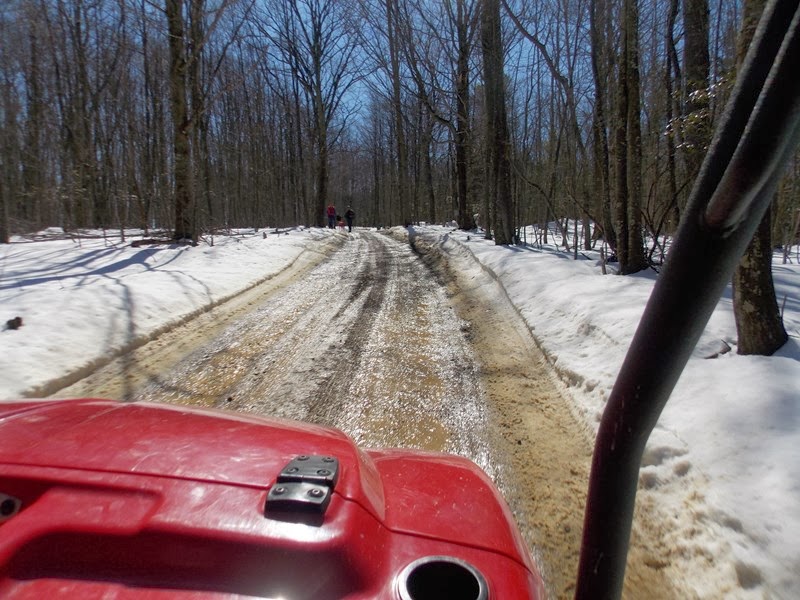 Since it was basically a one-lane road and vehicles with four-wheel-drive had driven to the top, we had to stop and back into a cleared spot once to let a couple of SUVs pass who were heading down-hill. Then off we went again through the snowy woods where the ground was covered with probably half-a-foot or more of snow. 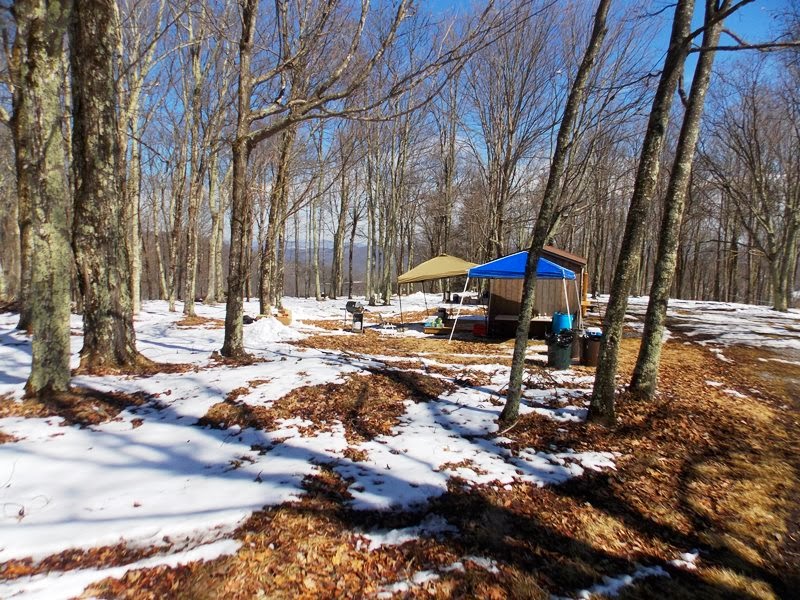 We finally pulled into a parking area where Ladd -- that's when I shook his hand, asked his name, and thanked him for the ride up the mountain -- dropped us off to ... what? There were a couple of tarps set up beside a wooden building, and some tables in the snow with people sitting around eating lunch and snacks. Trying to figure out what was where and looking for a sign to point the way, I started following the path toward the building. It was like looking for signs of civilization to ask directions. Where was the sugar house?

We were basically in the woods on top of one of the tallest mountains in Virginia. It looked like a winter wonderland and, quite frankly, felt as if we could have been in Vermont where maple trees also are a thriving business. It was exactly the kind of out-of-the-way place I like to explore. 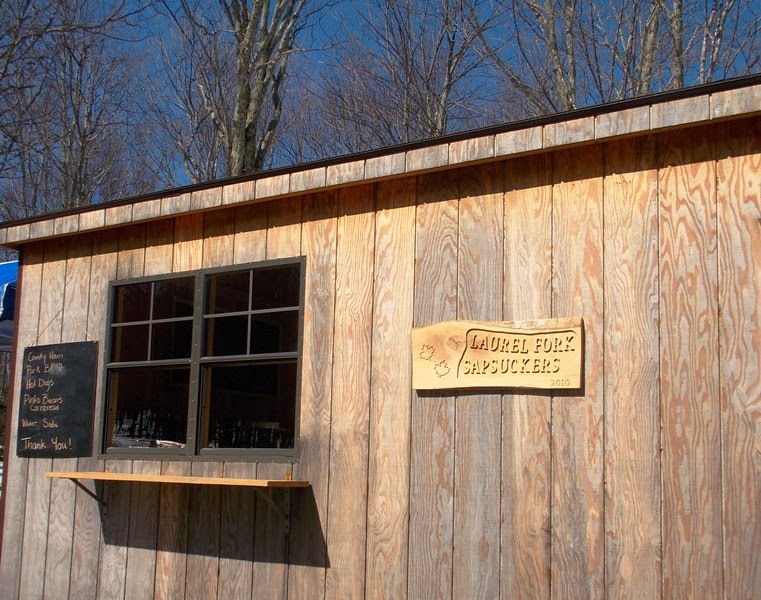 The little wooden building turned out to be the store/snack bar/restaurant where the cook was serving up grub and bottles of syrup filled the shelves.

There was a picnic pavillion and parking for those adventuresome enough to make the trek with four-wheel-drive. 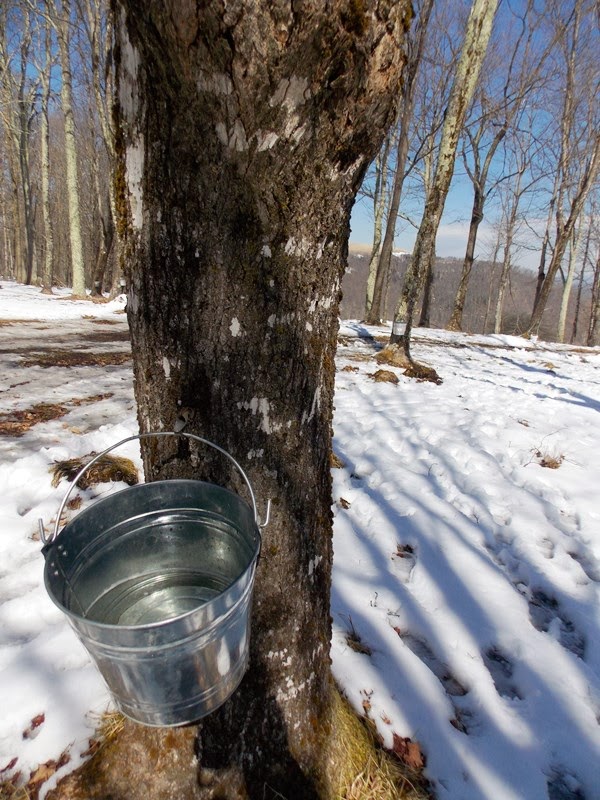 I spied tapped trees and buckets so made my way through the snow to get a picture. Thankfully we were prepared with LL Bean boots and jeans so no area was off-limits. Mud-R-Us. The warm sun had started the familiar process as the drip-drip-drip of sugar water could be heard filling the buckets. 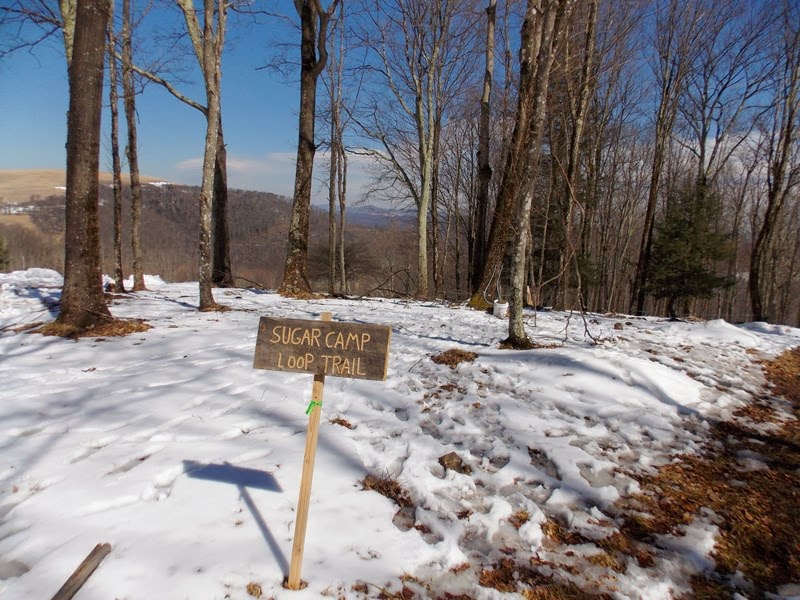 Trails invited visitors to hike on the mountain and down to the sugar house, and additional mules and snow machines were available to ferry those who didn't want the challenge of making it on foot. 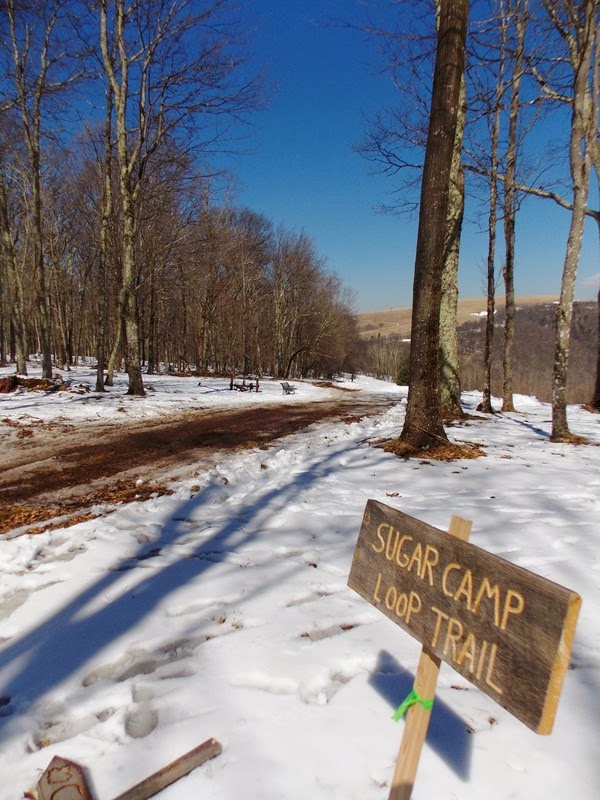 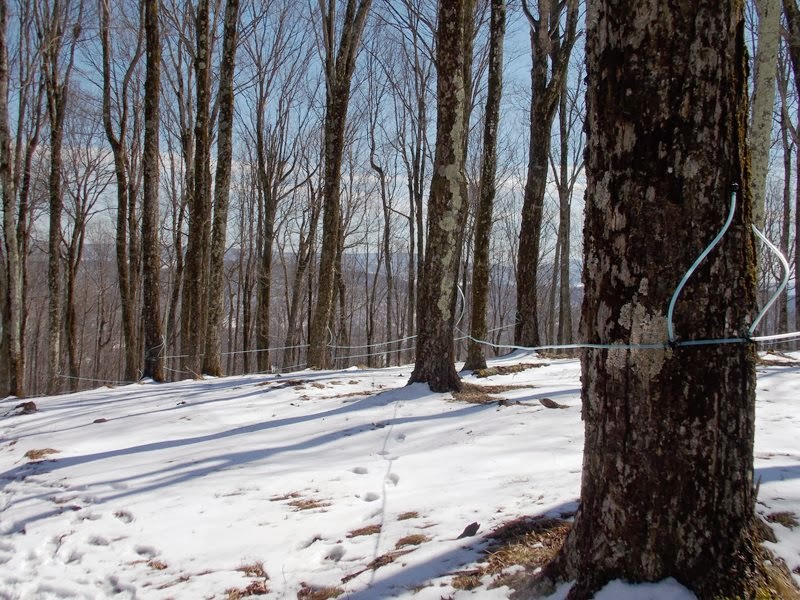 However, instead of depending on buckets of sugar water scattered throughout the grove, they run rubber tubing from sugar maples to the holding tank and leave the buckets for visitors to observe how it used to be gathered. Truly ... what would a sugar camp be without buckets hanging off trees? 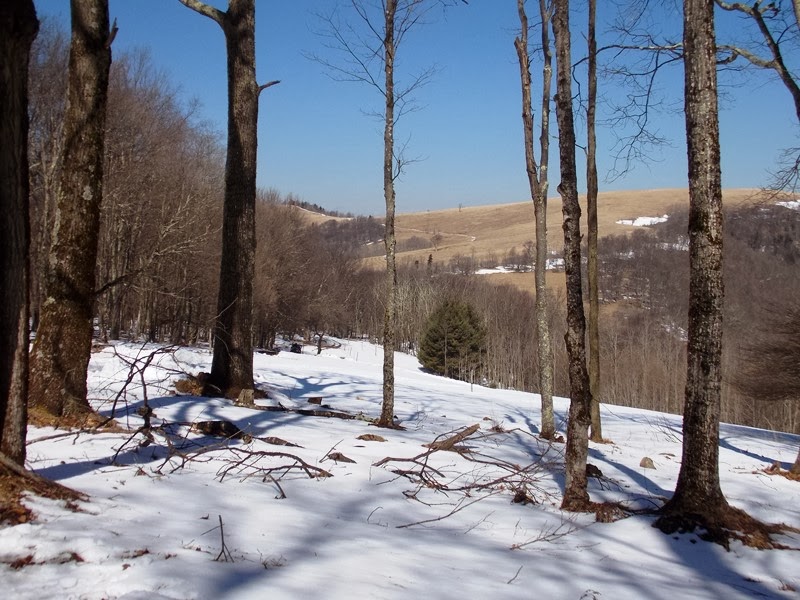 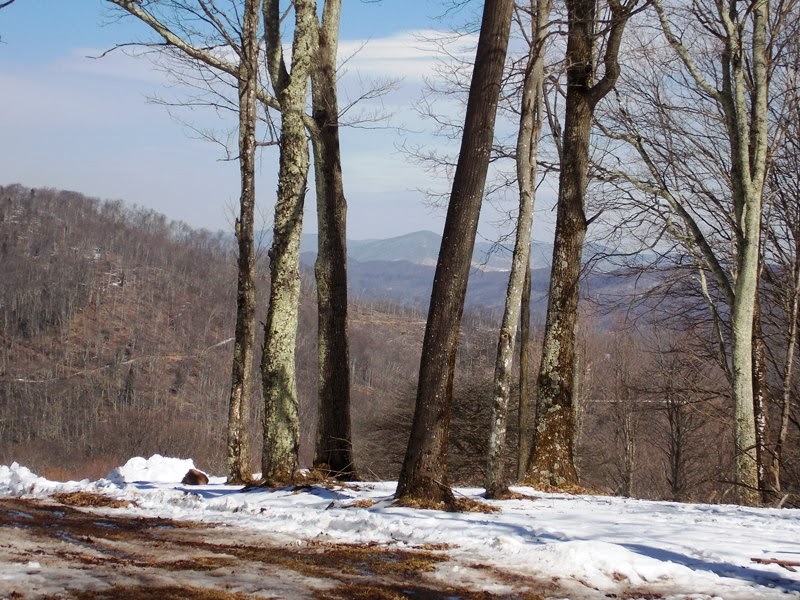 The views did it for me. I could have stayed all day taking in the scenery. Since we had just left Duff's, we didn't make the trek to the sugar house but, instead, visited the store and bought our first bottle of Laurel Fork Sapsuckers pure maple syrup. By that time we had syrup from three camps: Back Creek, Duff's, and Laurel Fork. It would provide a good comparison of the varying flavors. 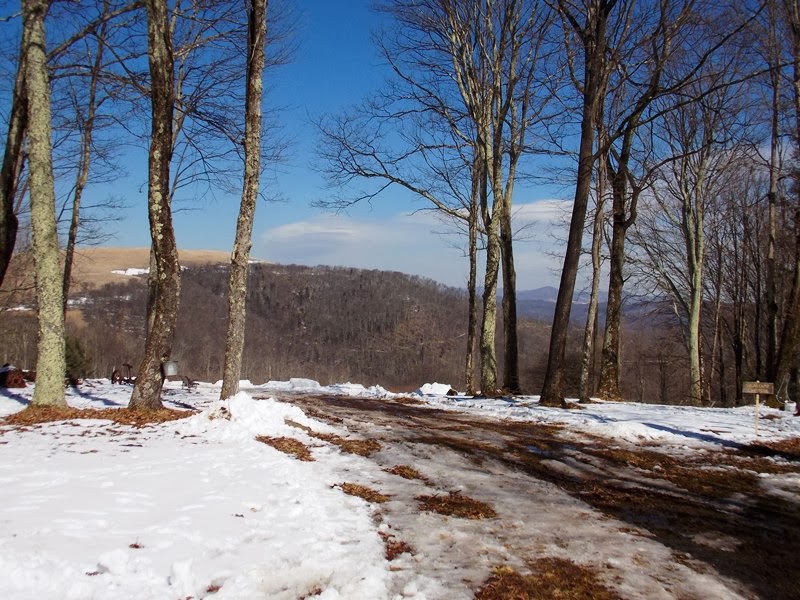 If you followed this trail right on over that drop-off, it would take you to the sugaring house in the woods beyond, a trail that disappeared down the side of the mountain. 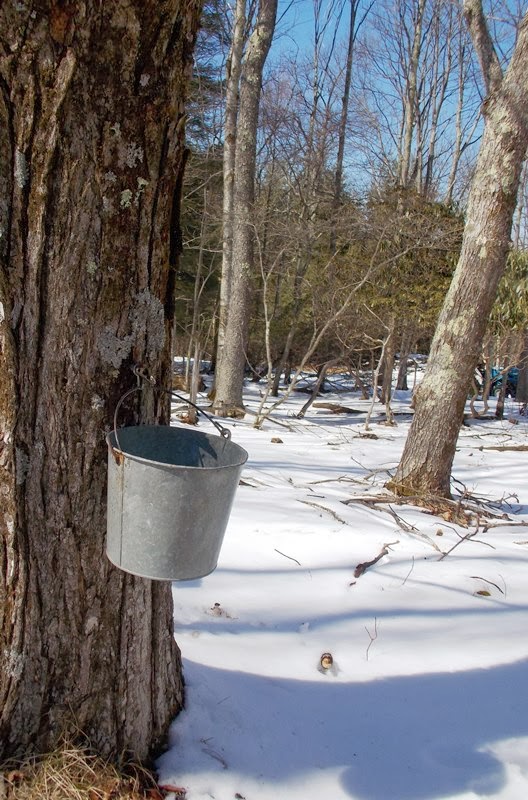 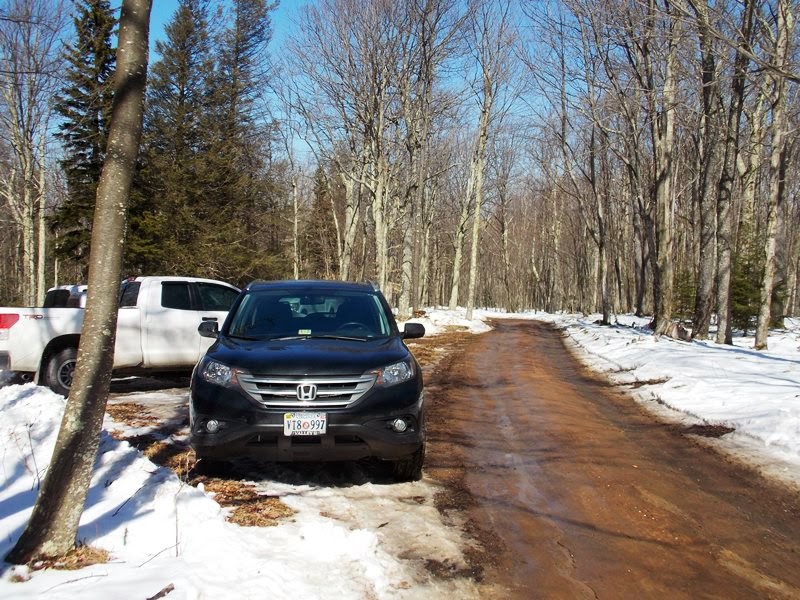 So after we wandered and talked and bought, it was time to head down-mountain but there was no Ladd in sight. So we started walking. In the parking area pictured above was that big white truck you see parked to the left. As we walked past, a young couple got in the truck. As they started driving down the mountain, they pulled up beside us where we had stepped off the road into the snow to let them pass, and Sam -- I asked his name later and he said he was Sam and they were from Patrick County -- offered a ride.

"We're heading down to the bottom," he said. "You're welcome to ride." As I hesitated, a young couple who had been walking behind us overheard and the young lady said, "I'll take a ride!" Sam, looking out the window, said, "Hop on in," and those two twenty-somethings nimbly hopped over the tailgate and onto the bed of the truck. Sam looked at us and, after a quick mental assessment, we said, "We'll ride, too." So up and over the tailgate where the young lady was sitting on the side so I sat beside her and Bill was by the young man perched on the other side, and off we went.

Woo-hoo, adventures galore! As the air whisked our hair and the road jostled us back and forth, we talked on the way down ... they were new to Monterey ... what do you do that you can live in Monterey, I asked ... he's into computer technology. Ahh, they can be just about anywhere. I would love to have spent more time talking with and getting to know them since they were new to the area but we arrived at the parking area and Sam stopped to let us all climb out. I shook Sam's hand and thanked him (that's when I asked his name and where they were from), and then we said goodbye to the young twenty-something couple whose vehicle coincidentally was parked beside ours. As we pulled off our muddy boots for the ride to Monterey, we were grateful for the friendly faces we had met that day. 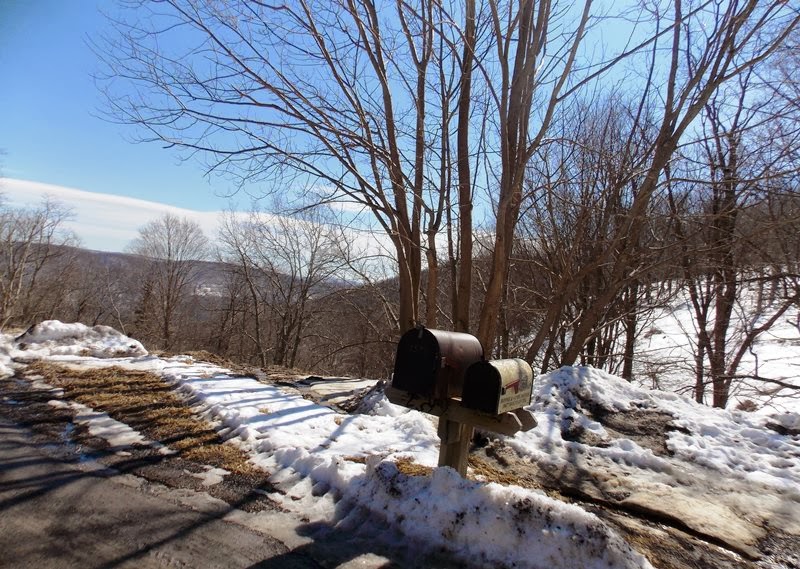 One last photo of the mailboxes for these Sapsuckers and the view beyond from Rt. 250 on top of Alleghany Mountain, just about as far west as you can go in the Commonwealth without tripping over into West Virginia. What a fantastic adventure! To keep up with activities, join their Facebook page. And I hope you get to meet up with Ladd, the friendly Sapsucker ambassador, and take a ride on his mule.