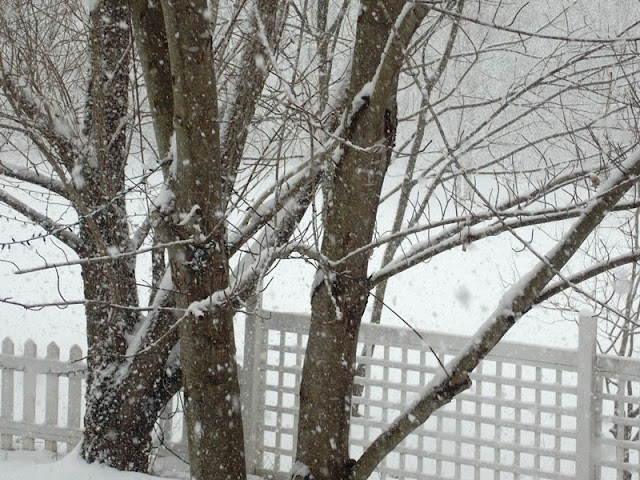 Tuesday was a snow day in the Shenandoah Valley. White flakes began falling at daybreak and continued until dark, piling up accumulations that were a little higher than expected with anywhere from 4 to 7 inches and more. Friends who live in the shadow of Shenandoah National Park in the northeastern part of Augusta County reported receiving more than 7 inches. 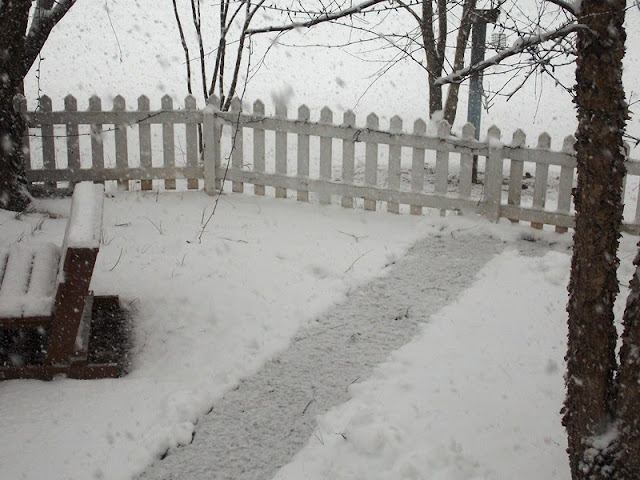 SWAC Husband had shoveled a path to the bird feeder to keep our feathered friends fed and happy during the storm but a late afternoon micro-burst of big, fluffy snowflakes quickly covered any cleared areas and added up to 2 additional inches to the previous 3.5 inches. 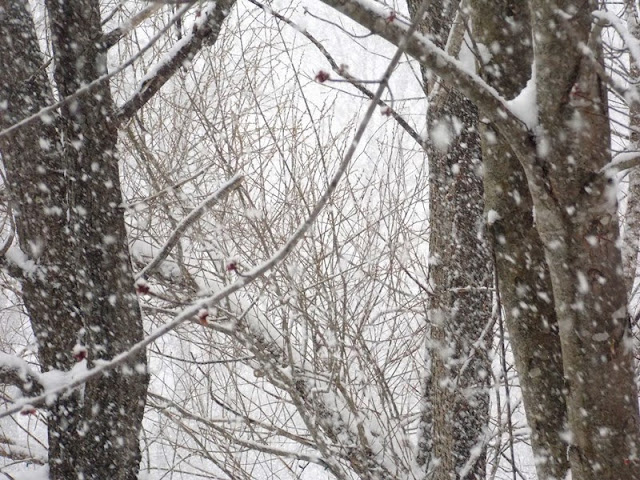 In almost whiteout conditions, the late-day dumping after 12 hours of continuous snow gave the illusion of watching from inside a vigorously-shaken snow globe. It was beautiful -- big, fat flakes of white obscuring the mountain ridges in a kind of defiance as if it was winter's last hurrah. One can almost imagine Mother Nature with her flower-gilded broom sweeping the icy old man out the door with his blast of cold and swirling snow even as she opened a window to allow warm breezes to sweep in so that a greening can begin for winter-weary Virginians. 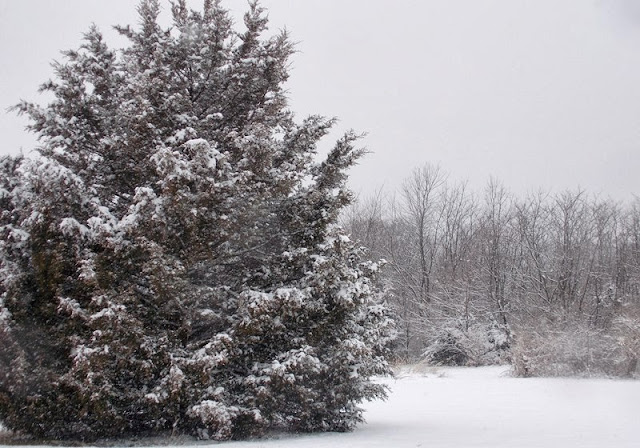 For a last hurrah, however, it was a beautiful winter wonderland with snow-flocked evergreens and ice-edged ponds. 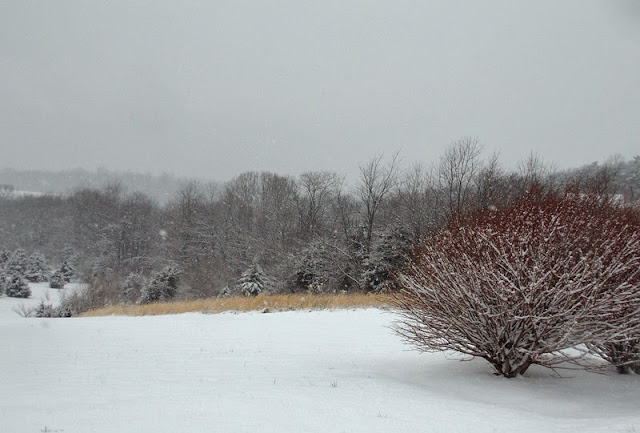 The Appalachian Mountains can normally be seen in the background but the storm obliterated long-distance views of the surrounding ridges. 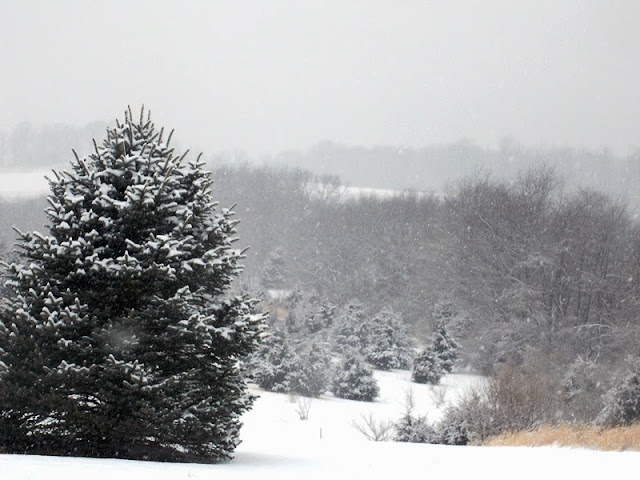 With the mountains obscured in the background, I often think about the mountain pioneers who settled western Virginia and how difficult winter weather must have been for them. With no forecasters to give a heads-up of incoming storms, what were the signs they looked for to know they must prepare for wintry precipitation? How long were they isolated during the long winter months, cut off from neighbors and towns by impassable routes that were not plowed and cleared immediately after (and often during) storms? How cold was it in cabins heated by fireplaces and wood stoves that worked overtime to push back at the howling winter winds and frigid temperatures that crept through uninsulated walls and floors? They were certainly hardy individuals who endured those difficult conditions while living on stored-up supplies and firewood from months of preparation for the cold. 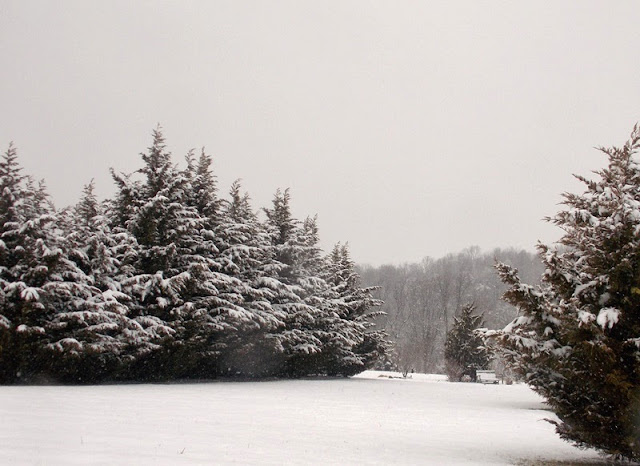 My grandfather was born in a cabin on "The Knob" in Grayson County, Virginia ... a three-room rough structure typical of thousands of others in the mountains. It had two rooms downstairs -- kitchen lean-to and main room -- and a big room upstairs. The walls were chinked with clay and the floor was several feet above the ground with stones around the foundation. A stone fireplace in the main room was the central heat in this little home perched on a mountain. My grandfather's brother, my Uncle Isom Osborne, married and raised his family in the shadow of "The Knob," but when he was first married, they lived with his parents on "The Knob" until settling in their own place. His wife was my Aunt Okie, and years after he died and Aunt Okie was up in age and when my son was an infant, I talked with Aunt Okie about that cabin.

We were all piled into my cousin's pickup truck as we had done since I was a kid only this time, instead of riding in the bed of the truck as I always did, I was seated in the cab with my cousin, Aunt Okie in the middle, and me with a baby on my lap. I was full of questions about life back then, and she told of having an infant during winter in the cabin. I couldn't imagine having to go about daily activities with my baby in winter in a drafty, freezing-cold house with only a fireplace to heat it and water hauled from the spring tucked just under the hill.

"How in the world did you survive?" I asked her as we jostled up the familiar rutted mountain road that had been part of the isolation of "The Knob."

She just smiled in a patient kind of way and matter-of-factly replied, "We just did. We managed." No complaints, no blaming anyone else, no excuses. They managed, they survived, they raised their five children, and all five live not far from the shadow of "The Knob." 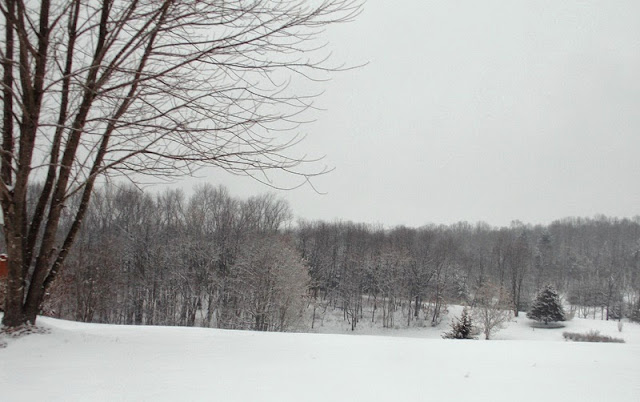 When my children were young, one of our favorite books to read out loud was Laura Ingalls Wilder's The Long Winter. When cold winter weather limited outdoor time, we often sat near the wood stove as my kids listened while I read about Laura and her family living through the historic winter of 1880-81 that was full of blizzards and hardships. Without a national weather bureau, Pa looked for weather signs in nature and that summer he noticed that the walls of a nearby muskrat den were the thickest he had ever seen. He took it as a sign that winter was going to be especially harsh.

A Native American also warned that there would be seven months of blizzards in South Dakota that winter and, sure enough, the first one hit in October and they continued through April. Whiteouts kept children from attending school, supplies dwindled and became scarce, and the Ingalls family ended up burning twisted straw to heat their house after they ran out of wood. Feet and feet of snow piled up on the railroad tracks and blocked trains that carried food and other provisions and, by the time spring finally arrived, some settlers were nearly starved.

We never tired of the story because it was fact. Real people faced real hardship and survived.

This February 2014 newspaper article from the Star Tribune remembers the winter of 1880-81 as it notes, "Forty degrees below? Storm after storm? Months without respite from the cold? Sounds familiar. But at least you could get to the grocery store." 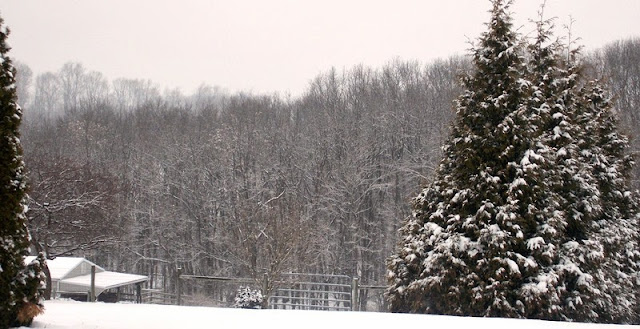 Flocked evergreens, farm gates, and stark winter woods. The storm offered one last chance to listen to the quiet, muted by a layer of insulation that won't be back until next winter. Although it's not out of the question to see snow in April (and some even remember it in May), the jet stream is shifting into a more seasonal spring pattern that will bring warmer temperatures to the Shenandoah Valley and Virginia. Since I couldn't stand to just sit inside and watch, I took the opportunity to get outdoors and capture the rural beauty of my neighbors' fields and woods. 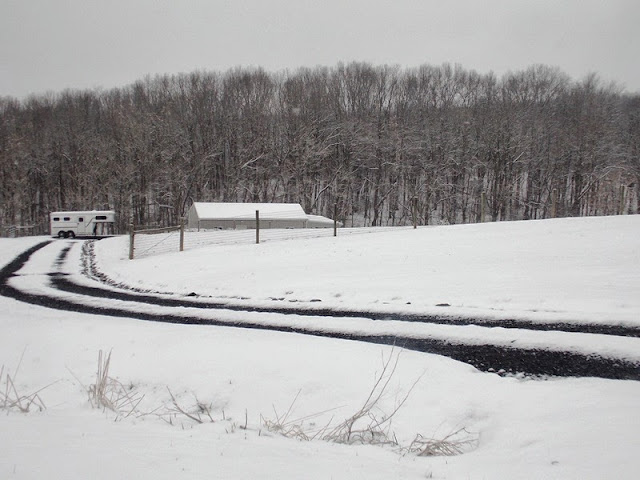 The horses were inside out of the weather. It reminded me of Tater and Max in warmer weather as they waited to be fed by SWAC Daughter as seen here in April of 2008, and I couldn't help but chuckle as I remembered Tater's encounter with a herd of guinea hens in her field later that year ("Invasion!!"). 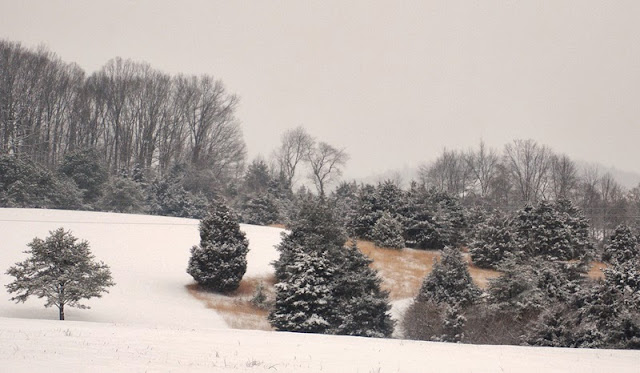 This is the time of year when it's obvious how many evergreens we have in the Valley. 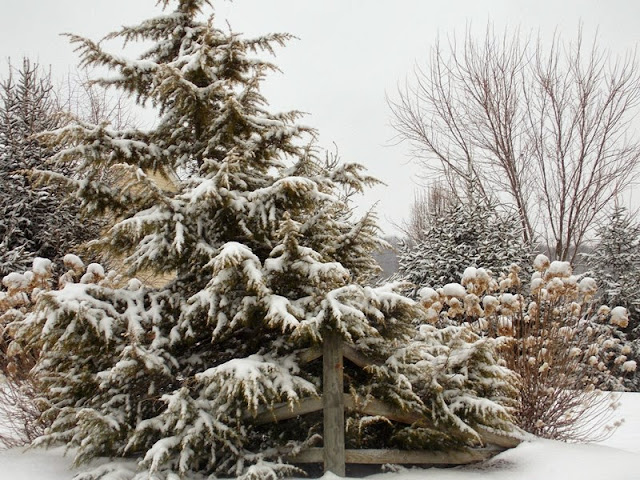 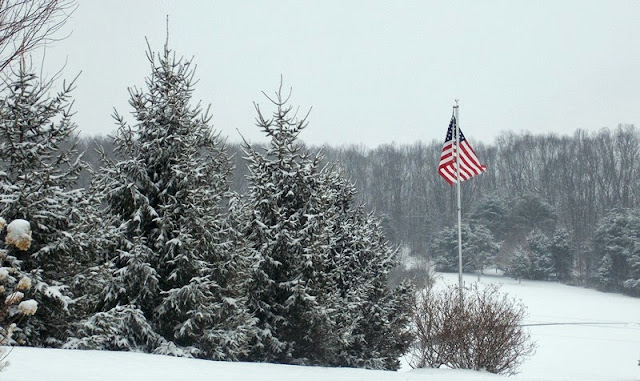 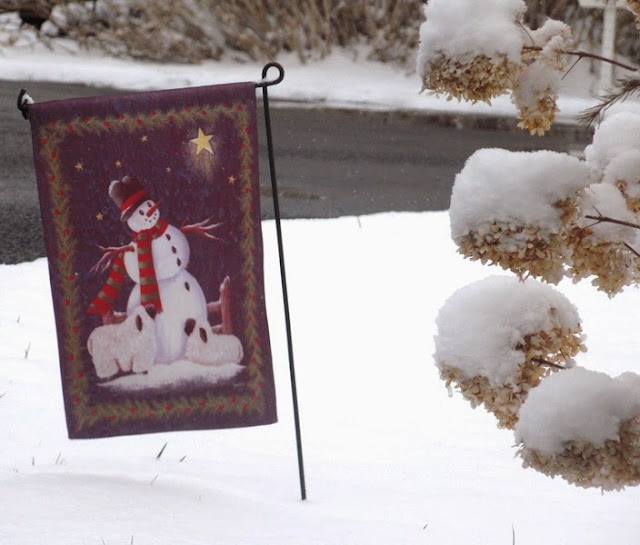 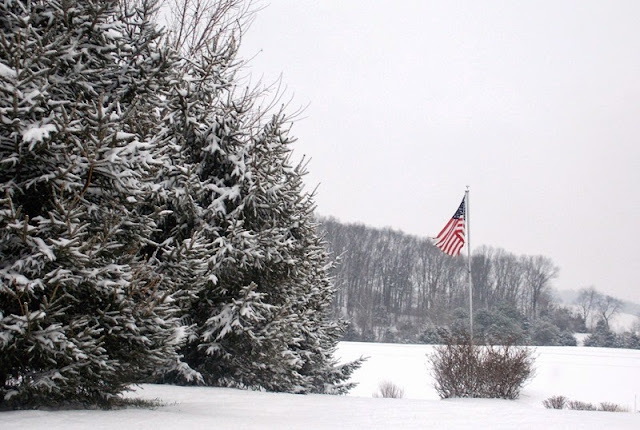 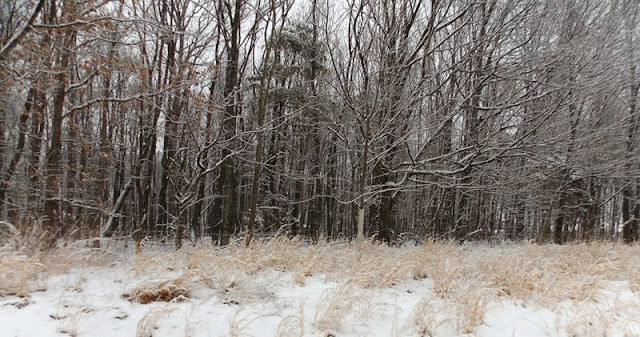 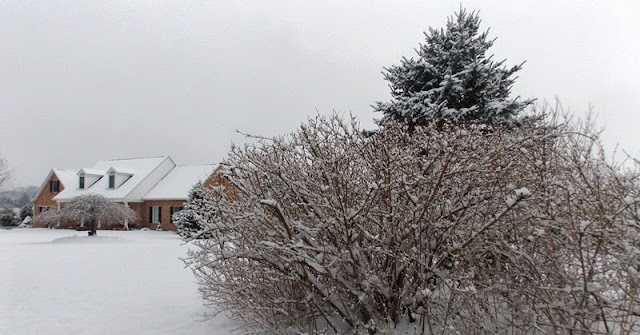 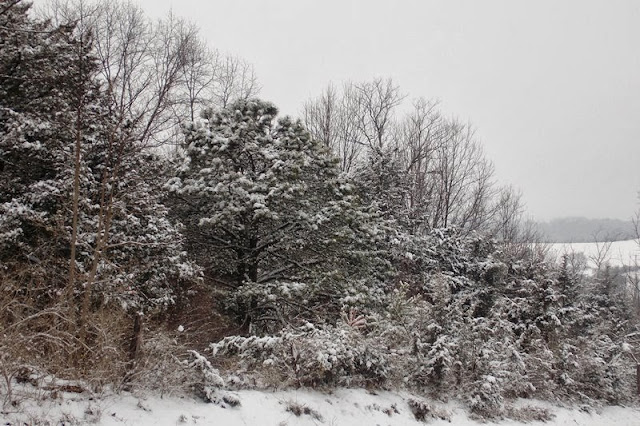 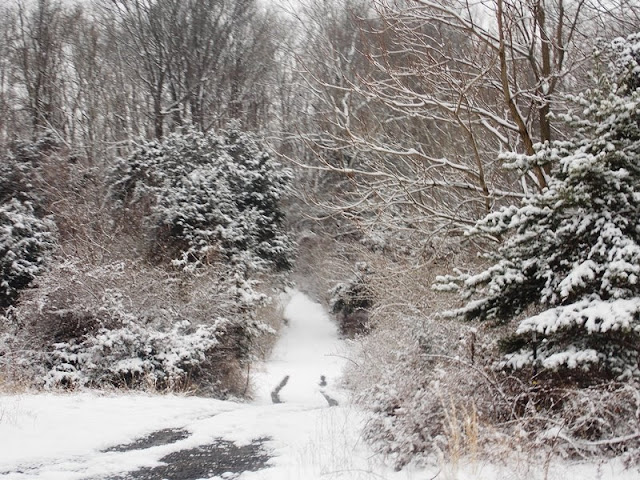 The last tracks of winter....?