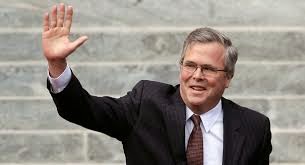 It's no secret that I'm a Jeb Bush supporter but someone else has been paying attention to this under-the-radar possible presidential candidate.

University of Virginia's political guru Larry Sabato's latest Crystal Ball has Jeb at the top of the field of contenders:


In our first ranking of the very large and very unsettled 2016 Republican presidential field back in April of last year, we decided to not even include the name of one of the brightest stars in the GOP universe: Jeb Bush. We just didn’t think, at the time, that the former Florida governor and brother and son of presidents was all that interested in running.

But during 2013 and into this new year, we’ve gotten the sense, like many others, that things might be changing. So much so that we now consider Bush the leader of the field if he decides to run.

The bold emphasis is Sabato's. In the Crystal Ball's latest, 2016 Republican Presidential Update: A New Familiar Name at the Top, he admits that New Jersey Governor Chris Christie was the preferred presidential candidate until his recent troubles with Bridgegate and falling popularity numbers. There's also a widespread distrust of politicians like Rand Paul and Ted Cruz so, for those and all kinds of other reasons, Sabato writes:


And that leads us to another reason to take a potential Bush candidacy seriously: The establishment loves him.

In recent months, we’ve noticed an unmistakable and widespread desire among some of the Republicans we talk to, particularly ones who would be classified as members of the establishment on and off Capitol Hill, for a third Bush nominee in less than three decades. In one conversation, we mentioned several other potential candidates on our list, but the chatter kept coming back to Jeb. He was the only candidate with whom these party leaders appeared to be comfortable.

Jeb is known as a strong leader who was very popular during his time as governor of Florida. His connections reach to pockets nationwide for fundraising, and his campaigning ability encompasses the Bush family and beyond, not to mention the mentoring of two former United States presidents -- his father George H.W. and brother George W.

In 1998 and 1999, the name George W. Bush kept drifting to the surface of presidential nominee talk. Few took it seriously. It feels like a similar scenario this go round. And while Sabato has seen it all with candidates rising to the top only to sink again, one constant remains: Jeb Bush:


The implications of a Bush candidacy would be wide-reaching, and -- to be clear -- we don’t know if he’s running. He probably doesn’t know himself. The reason we’re putting him first now is that if he were to run, we’d see him as a modest favorite over the other potential candidates in the field, and he might be the one Republican whose entry could keep other candidates out. For instance, Bush and Sen. Marco Rubio (R-FL) are close, and many observers doubt that they would run against one another in a presidential contest. (Bush’s son, George P., just appeared at two Palm Beach fundraisers for Rubio; the younger Bush is running for land commissioner, a statewide elected office in Texas.) That said, stranger things have happened in politics than a hypothetical Bush vs. Rubio matchup in a GOP primary field: Political alliances are often written in pencil, not pen.

While I cannot imagine Jeb and Marco Rubio running against each other for the nomination, I can imagine Jeb as the presidential nominee with Rubio as his vice president.

Much has been made of Barbara Bush, Jeb's mom, who, when asked about Jeb running, famously responded that there had been enough Bushes in the White House. What got lost in the hurry to push out that quote was the rest of her sentiment: that surely there were other families out there with sons and daughters willing to run for president whose last names weren't Bush. But she also came back recently to say she thought Jeb was definitely qualified and would make a terrific president. And smiled firmly as she added, "Be sure you say that I said that." I noted it on my Facebook page at the time.

For an interesting read, check out the rest of Sabato's top field of Republican contenders. Sitting right there on top is Jeb Bush, the one to keep an eye on as 2014 unfolds.

Update: Jennifer Rubin at the Washington Post has been keeping up with Jeb and again wrote on Wednesday about his possible candidacy:


The most compelling argument for Jeb Bush goes like this: The country and his party need him. Eight years of President Obama will leave us internationally weakened, politically gridlocked, economically listless and stewing in partisan juices. From the Republicans’ perspective, four more years of Democratic rule, especially from Hillary Clinton, whose fingerprints are all over Obamacare and a series of foreign policy debacles, would push the country to a breaking point. Moreover, both to beat Hillary Clinton and to clean up the mess, the party and country need a grown up, a proven performer and a qualified chief executive. Choosing an ideologically extreme and/or under-qualified senator or an untested and unknown governor is fraught with peril. So, therefore, Jeb Bush becomes the most logical choice.