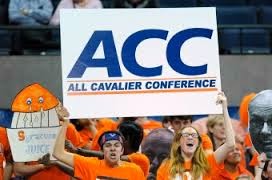 The latest ACC champs, University of Virginia's basketball team will return home from Greensboro to be greeted by snow that moved in Sunday afternoon. UVa beat Duke 72-63 to win the tournament much to the delight of most of the Commonwealth as Virginians became Wahoos for the day. Tournament-starved UVa supporters took to Facebook and Twitter to express their joy.

Meanwhile, a snowstorm moved into Virginia and could leave more than half-a-foot of snow by Monday morning. For Wahoo fans, it may as well be orange and blue flakes falling. In their excitement, they may be completely oblivious to the swirling white stuff as Charlottesville celebrates and toasts their basketball team.